Death from Above, Assasinations, and Declaration of War 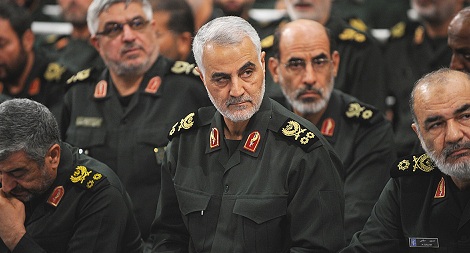 Sure, he's not just your average military man, but it was wrong nonetheless.


As Steve Sailer wryly observed in a one line post (with over 3 hundred comments) "Journalism is announcing Qasem Soleimani is dead when you never knew he was alive." Peak Stupidity does not even pretend to keep up, and our forte is the stupidity in general, not the details, in this case, of the warmongering.

Upon hearing who this guy was myself just yesterday, I don't think it's a bad thing that he's dead, but that does not mean I think the American military should used as a contract hit man. It was said that General Soleimani would have put Iran's nuclear weapons program into gear, and we nipped this in the bud. It was said that he was involved in this operation or the other (been around a good while - 20 years or so), and ... well, honestly I don't care about the details.

Would a country like Iran ever go suicidal with their nukes? I don't think the sane people in a country would let them, but then, we've all watched those Cold War movies like Dr. Strangelove, Fail-Safe, and others, made to show us what could happen even in a supposed republic of a country. That's a topic for, not another post this time, but another blog.

This America as the enforcer of the world, with its Death-From-Above is completely unbecoming of any nation with some self-respect and sanity. Sure, it seemed cool to a young man back in the day, with America having REAL enemies during the Cold War:

At least the Huey's could be shot back at. The drones and rockets don't give a damn.

You've got to grow up, though. Any veteran of war can tell you about the blood and guts and horror that goes with the glory, or often lack thereof. We have the more modern war movies to try to show us too.* Having been the sole superpower of the world since the late 1980s, America has squandered pretty much all of the world's goodwill in the last 30 years. The American military's raining death out of the sky on anyone that the Commander-in-Chief or his (usually Neocon) underlings decide "we don't like" is a big part of the loss of that goodwill. Americans may not all think about the innocent people on the other end, whether "collateral damage", kin, or just people who wonder when the next rain of destruction is going to fall. We have not been on the other end of this since almost forever (1812, excepting 2001).

Now, at this point, the reader may say "all is fair in war ..." and that sort of thing. That's just my point: THERE WAS NO WAR DECLARED BY THE REPRESENTATIVE OF THE AMERICA PEOPLE! Sure, OK, that's some Ron Paul style technicality, the Neocons might say. It's important though. Without a specific declaration, as against Germany and Japan in WWII, the US President should have no power to wage war. The President only becomes the commander-in-chief after the people have had their representatives** make a momentous decision about starting something big and terrible. In the meantime, the Presidency was not designed to be a command center for warmongering all over the world.***

I write the post today specifically because I DON'T know all the details about the former threat of Qasem Soleimani, and a whole lot of other stuff that those following the Lyin' Press infotainment very well might. As I wrote in the post "Back off!, regarding a different subject, the impeachment BS, sometimes it's only when you back off the Lyin' Press for a few weeks or months, that you start seeing the big picture. In this case, it is: What in the hell is any of the the business of, or how is any of this an effort in defense of, The United States of America?!

The US has not declared war on Iran. Therefore, assassinating an Iranian general is not the same as, say, the shooting down of Japanese Admiral Yamamoto by American AAF P-38s during WWII. Is that some technicality, or is a matter of you don't go raining down death from above, unless it's a do or die wartime situation?

President Trump: Could you keep one or two of your campaign promises next time, rather than letting your Neocons employees talk you into being a hit-man?

* As much as I've ragged on all modern movies (meaning after the mid-1980s), I'll give Hollywood credit for showing the horrors of war more realistically than in the days of guys just yelling "owww!" and falling over dead. I just watched Journey's End about a group of British soldiers in the trenches of WWI. It's simply sick - likely accurate, but sick.

** Representatives?! Haha! Representin' whom? I know, I know, I'm just detailing how this is SUPPOSED to work.

*** Ann Coulter, Peak Stupidity pundit # 1, laid out this wisdom from our Founders in a great column 11 months ago - "To Donald Trump: Hey, Commander! Start Commanding!"

Moderator
PS: Ooops, just went back to look at comment and realized my last comment could have been taken wrong. I sure as heck didn't mean "get the hell out" to Mr. Journey80. My meaning is that, upon backing up and seeing the big picture, people ought to just conclude, "let's get the hell out" - of there.
Moderator
PS: Journey80, you know more details than I. I won't argue about that, as my view is from farther back. Just get the hell out.
journey80
PS Why in God's name would anyone believe anything the neocons tell us Soleimani was "planning" to do? These are the same whores who told us Saddam had WMDs and 19 doofuses with box cutters did 9-11, etc. ad nauseam.

Soleimani's big offense was that he kept whipping ISIS, since they were our very own CIA-owned mercenaries, thereby messing up neocon plans for regime change in Syria. Don't embarrass neocons. Here endeth the lesson.

Cui bono? How 'bout Netanyahu? He just set up Trump's peakstupid ass to start the Bibi Netanyahu wet dream prime minister for life stay out of jail war. Bibi's on easy street now. Israel won't be able to get enough of the sleazy little grifter.

Moderator
PS: You see, Bill, I haven't even heard any of the reports either way. Obviously those "journalists" don't have their shit together.

Yeah, imminent attack on the US, that's the ticket.
Moderator
PS: No, Machine30, you're not along in this thinking, and I really think more Americans are getting wise to what's going on. The young people were not around for the Cold War and have got to see America as nothing but an empire. They may wonder the big military, or at least, if they can stay off the Lyin' Press infotainment, that is.

I want to write a post on this, but wouldn't we just be better off admitting that the Israelis just want a huge American presence in the area, and start charging for keeping a couple of carriers in the Mediterranean? (It's not that that's in any way constitutional to begin with, but it's better than what goes on now.)
Bill H
PS As an example of media accuracy, no two articles I've read agree on the method of his death. He was killed by helicopters, drones, rockets, or maybe fighter jets. He was killed as he stepped off of the airplane, or while walking from the plane to the car, or as he was getting into the car, or in the car at the airport, or in the car on the highway after he left the airport.

He was killed to prevent a "massive imminent attack on the US" or "in the West" or "on our allies." And we invaded Iraq because Saddam had "weapons of mass destruction."
Machine30
PS The United States (I refuse to call it a country, nation, or any such thing anymore) does whatever the F Israel tells them to do. This is all the more remarkable considering we GIVE them billions of dollars for...you tell me. The u.s. government is out of control, over the top, corrupt beyond redemption. It doesn’t even bother to hide this anymore. Combine the two and you get this assassination.
I pay exactly zero attention to anything the msm vomits up. The only entertainment I get is reading sites like yours, where at least I get the feeling that I’m not completely alone. As Rambo’s boss told him, “it’s over Johnny”...