(I believe this stupidity will carry over well into the '20s, unfortunately.)

Peak Stupidity has tried to avoid this topic, both in our reading and writing. This Trump impeachment thing is nothing but ctrl-left infotainment. Don't get me wrong, many are deranged enough to really want to kick out of a office a President who really hasn't done a whole lot that they don't like, when it comes down to it. (Oh, well, he does SAY a lot that they don't like!)

Well, just part of the reason President Trump hasn't done that much constructive on behalf of patriotic Americans IS this Russia/Ukraine/whatever-the-hell-next/collusion continual accusation - it's coming up on three years now. For lots of Americans its a big piece of infotainment, keeping them tuned in to whichever channel, blue or red. It doesn't matter - I'll be voting for the guy because the alternative is bound to suck way more. We can always use more time to prep.

The purported problem, from what I gather, is that President Trump is conducting foreign relations. What's really bad, they say, is that he has been doing something called "diplomacy" with people from foreign countries:


Isn't this better than banging shoes on podiums, saying "we will bury you", or picking up the red phone every other day? Maybe that's just me ... 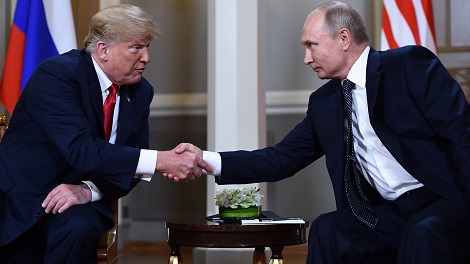 Those of us who follow foreign politics to ANY DEGREE WHATSOEVER know that the Cold War has been over for 3 decades*. Wasn't the left all over The Gipper's ass about how he needed to not be "Ronnie Ray-gun" and use more diplomacy with our (at that time, true) enemies? Now, you don't hear much praise for having a cool head, breaking the ice with even the worst of them (say, that N. Korean Kook), bringing the troops home. The Neocons beg to disagree with that old "give peace a chance" crap.

Peak Stupidity has discussed the rise of the Neocons already, near 3 years ago now, in Toward Peak Neocon? (Part 1 - Definition) and Toward Peak Neocon? (Part 2 - Unavoidable, one of 2 ways). Granted, we haven't been following ANY of the details regarding the accusations by the Blue Squad about President Trump and The Russians, but we have a theory on just one more reason this whole impeachment shitshow has been pushed hard. It regards those Neocons.

There's a common behavior-control tactic used for the more gullible, but often the best of us, called "reverse psychology". It works great on kids and dogs at least, sometimes cats. Now, we'd be the last to call President Trump anything but completely sane**, but you don't need Sigmund Fraud for this sort of thing.


Not really necessary for reverse psychology - not President Trump: 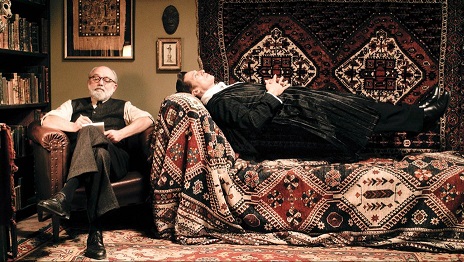 The Neocons seem to want to start up the Cold War again for various reasons, but if nothing else to get to use the US military like a toy set some more. They can't stomach the these two powers getting along, though there really is nothing that should keep America and Russia from being reasonably close allies (the Commies are not there anymore people - they left - many are over here!) Our theory is they are using the ire of the ctrl-left directed at President Trump in a form of reverse psychology.

The more accusations leveled at Trump for collusion, the more the President, sucked into all this stuff, will protest that, for one thing "I have been tough on the Russians". Just the fact that he wrote that in his letter to the old hag Pelosi (discussed here) is indicative that this assumed tactic of the Neocons would be working. See, they may not be in the forefront of the impeachment effort, but they can just be the ones "backing the President, but having our doubts." They come off as the good guys in the middle, but what they simple want is for Mr. Trump, with his big ego, to get tough on those Ruskies to prove the ctrl-left wrong.

Hey, it's just a theory from a guy that doesn't watch TV, so take if for what it's worth.


* Matter of fact, I really haven't read about any anniversaries of this... kind of strange. Is that part of the narrative too, to bury the obvious fact that the Cold War has been over and that's a good thing?

** Bullshitter, braggart, easily-distracted fool, incompetent hiring manager come to mind, but not anything that denotes a departure from sanity.

Moderator
PS: Yeah, and there really wasn't any good reason WWI had to happen at all. Imagine what the Euro world would have been like without it.
Dtbb
PS:The more I know and learn, it is plain the world we live in is just a continuation of WW1. Just my 2¢.