Final stupidity of the decade

(OK, yes, for the purists, since our calendar did not start in year 0, then the first day of '21 will really be the first year of the 3rd decade of the 21st century, but bear the hell with me here ...)

The following tweet came addressed to the Peak Stupidity offices. We don't get many, you know, with our subscription having expired, and a big balance due on our Amazon prime membership. So, when the UPS guy ran up to the door with this one, and subsequently ran like hell back to the van like they always do, we managed to grab it before the porch pirates, rather than find it crumpled up on the lawn. What a great communication method! 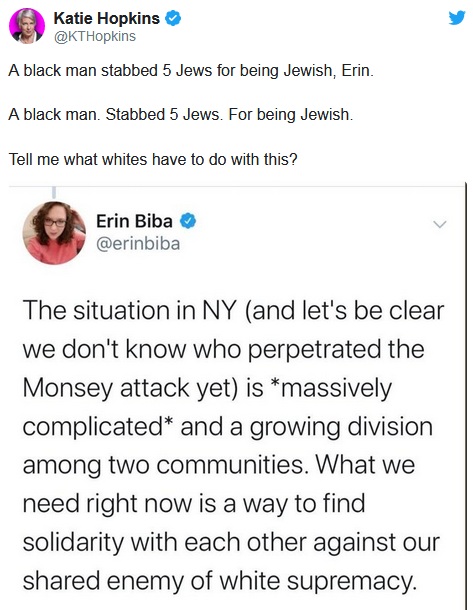 (At least this time I understand who's replying to whom.)

This is a great way to ring out the year 2019, with some champaign, Dick Clark reruns from NY City on the idiot plate*, our own fireworks from across the state line, and a piece of stupidity like that there tweet!

Yeah, that white supremacy is some powerful stuff. Better work against it, Erin, than notice who the thugs are, and that they are not particularly partial to you and your crowd no matter how many tweets you mail out. What will happen when there are not enough white people to blame for the violence? You'd better come up with something, and in 144 characters or less.

See, now this is why we don't go visit Times Square on December 31st, or the 31st of any month or any other dates of said months. The stupidity there is noxious. That will be one of my easiest New Year's resolutions to keep - stay away from NY City!

It'd be nice to be far away like this, in fact:

* Why not, right? The year ends the same time, you know that ball makes it down into the dumpster at the bottom the same way, Dick Clark looks the same each time, and the reruns of the Giuliani year ceremonies are free of the on-camera muggings that you're gonna get under the rule-by-crooks policy of the de Blasio mayoralty.

Moderator
PS: Isn't he the guy that did the rockin' new years eve for years and years, Mr. Blanc? I though I'd perhaps had a brain fart, but I just looked it up. He never seemed to get any older.

I was kinda hasty writing off the whole city I guess.
Moderator
PS: "This blog page is off a server in New York City!"

"git a rope."
Dtbb
PS:For some reason I'm reminded of the Pace Picante ads, pace the Twitter banality.
MBlanc46
PS The Dick Clark? American Bandstand? You must be referring to an incarnation that I missed. Speaking of Times Square, Mme B, being a traditional sort of a gel, likes to watch the “countdown” on New Years Eve. While so doing, she switched over to the broadcast from Times Square, which looked tacky and corporate. We were there in the daylight in, I believe, 2016, when it looked simply tawdry. There are still things worth going to NYC for, but Times Square isn’t one of them.