We've said it many times before, and, Gosh darn it, as they say in the nice parts of the Midwest, we'll be saying it again: there's strength in numbers.

This (2nd of the 2 I mentioned last post) VDare post by James Fulford, "North Dakota: Cass County Caves to Lutheran Refugee Contractor; Votes for More Refugees"* starts out with more of the usual bad news. However, the good news (for now) at the end is a great example of what Peak Stupidity has been trying to tell "you people". Here is a meeting of good citizens of the city of Bismark, North Dakota in which the prospect of being forced to attempt to absorb another 124 "refugees", which sounds like a pittance, but really isn't**, is discussed: 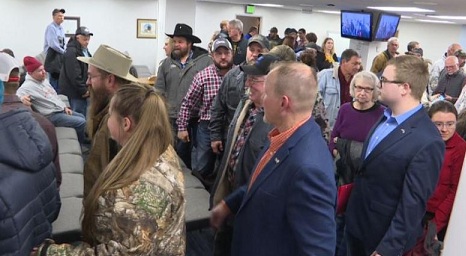 These residents of Bismark came out to this hearing in 11F weather to protest the plans of their betters, the Cass County Commissioners. As with other towns all over the country, there are the Globalists far away who want to make sure America does not keep resembling America, ANYWHERE! Then, there are the locals involved. In this case, it's the Lutheran organizations that not only can FEEL GOOD, but make some serious coin, by resettling foreigners from strange lands to what were patriotic American strongholds. This rang a bell with me, and I see that these Lutherans have been getting around - see "Nice Church ladies destroy Lewiston, Maine".

From that post of March 15th of this year, I realize I'd written part of what I was going to write today already.

“We’re just bringing in downtrodden families, plus maybe a couple of poor teenagers, from Somalia. I hope there are no racist xenophobes here. If so, it’s only 15 asylum-seekers to our town of 30 thousand – how can you be so mean and nasty to object?!” Well, nobody objects. Nobody in town wants to have everyone else there look at him like that nasty foul-mouthed bad guy that isn’t compassionate enough to provide a “room at the inn”.*

At the next asylum-seeker meeting for another 20 asylum-seekers, its just the same, except you won’t even find 1/2 the people there from town to show up to object, as they can imagine how embarrassing it would be. This goes on for years, and people have kids. People find it easier to move to a different town than to say anything. You’d think that’d be silly… but no, it's pretty much all that's left to do.

Yeah, well all it does take, though, is for more than one or two lone voices to speak up. If you're the one lone guy, and the rest of the crowd (if any) is too cowardly about being called names to back you, it works badly. However, if the rest speak up, this becomes a movement, and your power increases greatly.

Even with this crowd, per the article, they, and one sympathetic commissioner named Brian Bitner, just mentioned numbers. "We are taking the highest number per capita ..." etc. OK, that's a start. At some point, the truth must be said though: "These are not Americans, much less North Dakotans, and they never will be. This is not just a few people every year on fiance visas, etc. In these numbers, we are importing pieces of a foreign country into our state. THIS IS BULLSHIT!" That takes some guts, but not a whole lot if there are 100 people clapping behind your every sentence.

It's good to see a start like this, though they may be ignored in the end in this battle. People have to start getting riled up enough to speak their minds. Stick together, Americans - there's great power in numbers.

* The VDare post is taken directly from the site Refugee Resettlement Watch from the wonderful Ann Corcoran - here's the post from her site. RRW was on blogspot for years, but they "cancelled" her less than a year ago, and she got the site back up without blogspot a few months later. Note her new URL, and note OUR URL, for that matter.


** An excerpt from Mr. Fulford's article explains just as well as VDare often does:

Yep, and this is by far not the only time this has happened and will be attempted again.

Dtbb
PS:Yep. My bad.
Moderator
PS: Was this comment made for the later post on AntiChrist Soros, Mr. Dtbb?
Dtbb
PS:Local elections often have pitiful turnouts. Commenter at iSteve said NYC averages about 30%. Our own fault?