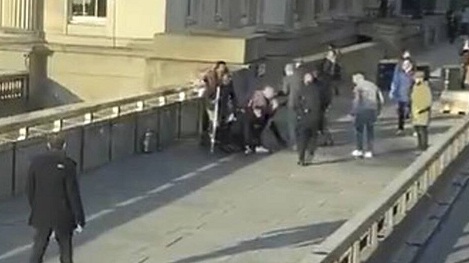 (Per iSteve commenter Bragadocious:) Nice cover page.
The next 500 pages are “all work and no play makes Jack a dull boy.”

I hope our Peak Stupidity readers will cut us some slack for something we don't do very often anymore. That is, for this post, the material is taken completely from the story behind, and comments under, the Steve Sailer post "Jack Merritt and Saskia Jones, RIP". These two young adults were the ones stabbed to death by the latest Moslem "terrorist", but just murderer, really.* Then, before the Bobbies, the British cops who didn't used to even carry guns, shot Pakistani Moslem Usman Khan dead, one actual Brit subdued him via a stab from a Narwhal tusk. Coming soon to formerly-Great formerly-Britain:

"What do we want?!
Narwhal tusk control!
When do we want it?!
We want it now!"

Where was I? The point of Mr. Sailer's post is to point out the extreme irony of this latest immigrant murder spree. See, Mr. Khan had been let out of prison by a lefty official, after being put there in '12 for "terrorism offenses".

First of all, Mr. Sailer is a very nice and civil guy, or at least is from what I get from all my reading. This is an example, the "RIP", that is, but first I'll explain the politics and aborted life's work of these two murder victims, along with something about the downright sick reaction from Mr. Merritt's Dad. These two victims of the stabbing spree by "British Man"** Usman Khan worked for a program called Learning Together, "a prison-based education project". Both of these lefties had been classmates in Criminology together at Cambridge University. Regarding Jack Merritt, per Mr. Sailer:

A Critical Analysis of Over-Representation of Black, Asian and Minority Ethnic Males Aged 18-21 in the British Prison System.

[That first sentence is Steve Sailer. Yeah, the poor bastard, indeed. ;-}]About this egregious over-representation, iSteve commenter BigDickNick (not his real name) adds: "Muslims are only 1% of the population of the UK, but 100% of people shot by police for murdering me are Muslim.” There's your over-representation - you've got you had a good point there, Jack.

The story is that Mr. Khan, with his new-found freedom, thanks to the hard-working people in these "Learning Together" and other bleeding-heart*** programs, was able to attend a conference of folks pushing for more leniency and forgiveness in the British penal system. Maybe the refreshments weren't to his liking, or perhaps it was simply his belief in Jihad against the infidels that set him off, but Mr. Khan used this opportunity to kill two of the people working the hardest to set people like himself free. Sometimes, the plenary sessions go on too long, and people are not allowed to ask questions in the middle of talks. That IS a problem. I GET THAT! [/Tucker], Mr. Khan.

If it weren't for those pesky narwhal tusks that hang on the wall everywhere, Mr. Khan may have taken out more attendees. Who cares what bleeding-heart work they were up to? After all, Usman was already out, and the hell with errr, to Allah with his Jihadi cohorts still in the pen.

The cops shot attendee Khan dead, thinking (or maybe not really) that he may have a bomb on "his person". Would Jack Merritt or Saskia Jones have been pleased with the ending, as they lay dying, or did they miss that part? Did they still believe in their Learning Together program in their last few seconds of life on this earth?

Steve says "RIP", but I can't be so sure. These two were typical deluded snowflakes, and after being brought up that way at home and through 16+ years of indoctrination by the government system, their view on life is to be expected. That's still not an excuse though. You can do such things as wise up, if you keep your eyes and mind open. Pushing for the early release of violent criminals, when you don't have the wisdom, but do have the evidence to know what the result may be gets more people killed. The road to hell is paved with good intentions like those of Jack Merritt and Saskia Jones. As a parent, I feel should feel something for the parents, but that brings up the other point.

Just as with the cuck Rob Tibbets, father of poor Mollie Tibbetts, raped and killed in the corn fields of Iowa by an illegal alien, Dave Merritt sure had a sick reaction to what would normally be grief and mental agony. From what iSteve commenters wrote, the guy went on a tweeting rampage instead of, say, regretting that he wasn't' there at the conference to save his son with a narwhal tusk (what can't they do?!) This is Dave Merritt's full statement from a UK Guardian article:

Jack was proud. Jack was absorbingly intelligent. Jack was fiercely loyal. Jack loved music, art, eating good food with his family, and having more than one pint with his mates. Oh, and in case you haven’t realised by now … he was also devilishly handsome.

But Jack was also angry, frustrated, selfless, stubborn. He was angry because he saw our society failing those most in need. He was frustrated because the political elite have forgotten why it is important to be fair. He was selfless in his dedication to make things right in every second of his life. Jack devoted his energy to the purpose of Learning Together: a pioneering programme to bring students from university and prisons together to share their unique perspectives on justice. Unlike many of us, Jack did not just go to work. He lived and breathed fire in his pursuit of a better world for all humanity, particularly those most in need.

If Jack could comment on his death – and the tragic incident on Friday 29 November – he would be livid. We would see him ticking it over in his mind before a word was uttered between us. Jack would understand the political timing with visceral clarity.

He would be seething at his death, and his life, being used to perpetuate an agenda of hate that he gave his everything fighting against. We should never forget that. What Jack would want from this is for all of us to walk through the door he has booted down, in his black Doc Martens.

That door opens up a world where we do not lock up and throw away the key. Where we do not give indeterminate sentences, or convict people on joint enterprise. Where we do not slash prison budgets, and where we focus on rehabilitation not revenge. Where we do not consistently undermine our public services, the lifeline of our nation. Jack believed in the inherent goodness of humanity, and felt a deep social responsibility to protect that. Through us all, Jack marches on.

Borrow his intelligence, share his drive, feel his passion, burn with his anger, and extinguish hatred with his kindness. Never give up his fight.

To Jack Merritt. Now, and forever.

Yeah, he may have been seething at DURING his death. It hurts to get stabbed. The fear as his blood poured out and internal organs couldn't do their jobs would be extreme. I don't think even a cucked, irresponsible Dad and 16+ years of schooling would keep one from seething at the guy stabbing him to death. Some use their grief to motivate themselves to work against whatever has caused the deaths of their children, not always really logically (as with the gun control crowd), but most don't promote more of the same! Dave Merritt has used this opportunity to rail on his perceived political enemies, calling them haters. This was not one of his fellow white Brits either. The murderer was a guy (just as with the Mollie Tibbetts murder) who hated the British people and should not have been in the country to begin with. He was there due to sick, bleeding-heart lefties like yourself, Dave Merritt.

Good ole Waylon. Listen to the lyrics. This is from when America was no utopia, but it all still made sense.

* I put "terrorist" in quotes, because the problem is not some terrorist group or cabal with a plot of conspiracy. If there's any conspiracies and cabals, they are contained within the elites of modern Western society - those that push this immigration invasion by un-Western-like foreigners have simply enabled these latest 2 and others to be murdered.

** He was born in Britain, so I guess one COULD write that with a straight face. The really gets to the problem with immigration of far-far-foreigners, as even the children won't assimilate easily. In big numbers, as Peak Stupidity explained in "Immigration invasion, assimilation, and refugees", there's not incentive for anyone to assimilate at all.

*** Did this guy stab their hearts first? Some people take the expression entirely too literally.

Moderator
PS: I remember that'd I'd read this one before, Street Fighting Man. I guess it could be a quick post.

The Professor, Carlo Cippola, felt the need to be politically correct, though, even 43 years ago: "Every category one can imagine—gender, race, nationality, education level, income—possesses a fixed percentage of stupid people." A fixed percentage? He doesn't give a number.

Political correctness itself is what I call a form of stupidity, but the Professor puts that in the "bandit" category - it has benefits for one's self, but losses for others.
Street fighting man
PS https://qz.com/967554/the-five-universal-laws-of-human-stupidity/