The Onion has still got it.

I used to keep up with The Onion humor site back about 20 years ago. Maybe it's time to check it out again regularly, along with pundit Steve Sailer's favorite similar site, The Babylon Bee (funny on the conservative side).

I'm just gonna put this whole quick post on here directly, including their own picture. 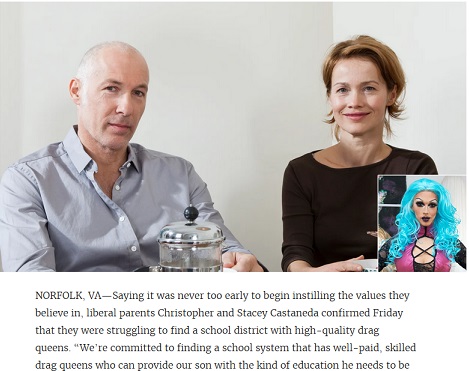 NORFOLK, VA—Saying it was never too early to begin instilling the values they believe in, liberal parents Christopher and Stacey Castaneda confirmed Friday that they were struggling to find a school district with high-quality drag queens. “We’re committed to finding a school system that has well-paid, skilled drag queens who can provide our son with the kind of education he needs to be successful,” said Christopher, adding that the child’s current school has a ratio of only one drag queen for every 32 students, leaving little time for one-on-one instruction. “We want Caleb to have access to a wide variety of styles—fish drag, camp queens, activessles—not just the same old busted Tina Turner impersonator he has now. Ideally, we’d have him in a drag queen–immersion program, but at the very least, we want a district where its a core part of the curriculum. Stage presence and wow factor are a must, and if the queen is bilingual, that’s even better.” At press time, the parents announced plans to enroll Caleb in private school after witnessing St. Edward’s Academy’s absolutely stunning autumn drag pageant.

We've gotta be a little careful though ... no, not about being sued for just pasting in a whole humor post from another site without asking. I'm more worried about this not being funny anymore, by say, next Tuesday, when this could be a completely serious NY Times article.

Moderator
PS: OK Restleless, thanks for the tips.
restlelss94110
PS You should also check out Genesius Times and (for satire on the military) Duffle Blog. GT especially is a crack up.