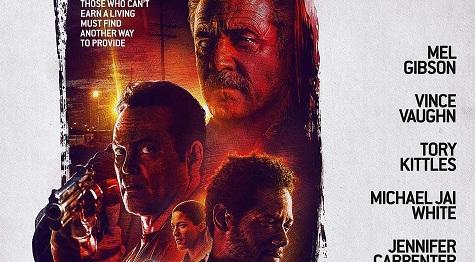 The only reason I watched the 2018* movie Dragged across Concrete to begin with is that a commenter on unz.com had embedded one scene from it of a pretty realistic family (Mel Gibson's movie family) about race, neighborhoods, and "good schools". Truth in a full-length feature film?! I gotta see this!

It turns out I didn't hafta see this, after all. The movie was entertaining enough compared to the comic book movies or the endless sequels and prequel rehashes and prehashes that are about all else that comes out of Hollywood. It's one of these cop partner/buddy movies. This theme never gets old, I guess. The cops can be the Constitution-abiding good guys as on Adam-12 or C.H.I.P.s, the white/black comedy duos as seen on Sanford & Son and Beverly Hills Cop, or the tough-ass guy with newbie partners who get killed each movie just when they are getting the hang of it (Dirty Harry and sequels). They can turn into bad copes too, as is the case in this movie.

Any which way, there is the back-and-forth banter during the stake-outs in which you see how close the 2 are from working together so long. I don't know how many real cops have the same partners for long periods of time like this. Lately it's just a matter of both of them being able to fit into the squad car. In Dragged across Concrete Mel Gibson is the older, experienced cop who is perhaps getting sloppy due to old age, while Vince Vaughn is brighter one but has a lot to learn. The two get in trouble with the media early on in the movie, are suspended for a good while (without pay, but don't they usually get that pay in real life suspensions, even if they've unjustifiably beat the crap out of someone?), and decide to go crooked in an intended non-violent way to help Mel Gibson shore up his family finances.

That's where the movie may or may not be believable. Wouldn't a guy with decades on the police force, even with a disabled wife, but only ONE kid, have some money saved up and a good cash flow? It's all seniority, seniority, seniority. Gibson's character went crooked for his family, but that would mean he must have been a financial idiot for years to not have the money to get out of the hood, for the sake of his teen-age daughter (the one discussed in the realistic scene mentioned at the top). Are people really that bad with money?? Yeah.

Now comes the racial angle. See, the black main character, movie-named Henry, who got out of prison for a decent stint for something he did hanging with the wrong people, whose Mom had to become a hooker, and kid brother is in a wheelchair, is the other sympathetic guy. Yes, they'll be some blacks who really are decent smart guys who "didn't do nuthin" and never had a chance going to prison. It's pretty rare. As bright as this character is in the movie, Affirmative Action and hopelessly hopeful white support for his type should have gotten him a long way in life.

What are the chances of this one criminal being one of the good ones? The idea of "what are the odds?" is a running theme in this movie as cop Gibson would give odds to partner Vince Vaughn while discussing the nefarious and non-nefarious deeds they were involved in. He never really vocalized the odds of this noble black fellow, being a bright cookie and just doing what HE had to do also for his family. What, 1 in 50 maybe? It turned out to be important near the end of the movie.

Lastly, just as a kind of interesting scene that was not at all relevant to the story, yet strangely very conservative, there was one bit of anti-feminism in Dragged across Concrete (hence that topic key attached to this post). For the life of me, I cannot figure out from the tee-tiny IMDB character pictures which actress/character it is, but this lady, a new Mom on the slightly-older side, was shown leaving for her first day back at work at the bank after having her baby. In this scene, the woman is paranoid and almost sick to leave her apartment and baby to go to work. She had put off going back for months, using up all her sick time, etc. per the conversation with her house apartment-husband. I don't know how the script writers got this under the radar, as it does not at all fit in with the feminist agenda. (Film editors' strike, perhaps?) Not to be a spoiler, but it turns out that, no, she'd been better off staying at home with her baby. Any conservative could have told her that, and she'd be alive today .... OOPS!

Yes, there's an agenda in this film. It's fairly entertaining and suspenseful, and a tad funny. Don't pay any hard-earned money to see it. I don't want our readers going crooked ...


*See, as Peak Stupidity ranted about in a 3-fer movie review summer before last, usually movies made past the early 1990s just, well, don't work out for me.

** Another little thing that continues through the movie is that Henry Jones the black participant in the robbery (oh, forgot to say, there's a big robbery, which is a big and suspenseful part of the movie***) often says "aight" for "all right" as an affirmative. That pronunciation is a white Southern thing. I think this director is not hip.

*** What kind of freakin' movie review is this, right?!

Moderator
PS: Same here, but all I knew was that one scene. I thought there'd be some actual realism, but I should have known better.
PS: I was very disappointed by this movie. It just didn't make any sense to me. I had high expectations by what I read and heard. It failed.