More on the Demise of California

After our previous post pointing out the nice work by Ann Coulter on the "state" of California, Peak Stupidity may as well finish out the week's blogging on that same theme. Additionally, this one has a tie-in with economics, the stupidity of which this site has a big interest in.

We've discussed the new housing bubble version 2.0, along with the 1.0 version already. Due this time to not only the big Chinese money influx we've written about, but also just the huge population increase due to legal/illegal immigration along with strict environmental rules, housing costs are going though the red-clay-tiled roofs out there. The Bloomberg financial site explains How California Became America’s Housing Market Nightmare. 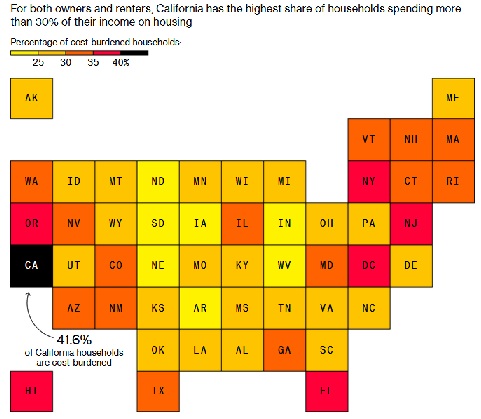 (This "cost-burdened" bit is a really lame-ass term though, but, per the legend, it means the spending of > 30% of income (gotta be gross income) on housing by a household.)

Per the writers, Mr. By Noah Buhayar and Mr. Christopher Cannon:

The median price for a house now tops $600,000, more than twice the national level. The state has four of the country’s five most expensive residential markets—Silicon Valley, San Francisco, Orange County and San Diego. (Los Angeles is seventh.) The poverty rate, when adjusted for the cost of living, is the worst in the nation. California accounts for 12% of the U.S. population, but a quarter of its homeless population.

There's the facts. I really, really hate linking directly to stupidity, as it was only the thematic map and the couple of facts that I wanted. Against all wishes to not sidetrack this post, dammit, now I feel obligated now to fisk this crap from Bloomberg's finest young idiots. Bear with me, please.

If you are a Steve Sailer reader, or Steve Sailer himself ("the man's like ... a phenomena...I can't even ..."), you'll be so proud of me here. After my mentioning the huge effect of immigration on California's housing prices, not to mention other problems, I did a virtual ctrl-f (this is a table) for the text "immig" anywhere in this Bloomberg article. No joy - ZERO hits! Need I go on about the stupidity of Noah Buhayar and Chris Cannon? Sure, why not?

I assume these guys are young socialists now. They made the venerable California Proposition 13, which saved millions of established Californians from having to move or being evicted for their homes for non-payment of city/county property taxes that would have ended up higher than any mortgage payments, into one of the culprits. Besides the fact that this great, successful effort by real Californian's of the 1970's kept them from having to make hellacious payments until death, they also limited the scope of government, at least at that city/county level.

The State government of California is another story. Its profligate spending of the white middle class of California's tax money, along with the extremely financially-burdensome condoning, and nowadays outright SUPPORT, of illegal immigration*, and the environmentalist brinkmanship (about the only thing the authors do correctly mention as a culprit.) has put California in the sorry state it's in.

Conveniently, the wonderful, more-calm-than-this-guy, Californian VDare blogger, Mrs. Brenda Walker**, just got finished with Conservatives Leave California For A More Recognizable America. Please read this one. The numbers are staggering. (691,000 conservatives left in one year? I'm not sure how they got this so precisely, but still..) Mrs. Walker states that the only reason California has not reached that huge 40,000,000 in population is that the big amount of emigration from fed-up (mostly) conservatives balances out the immigration of foreigners.

This State is GOING DOWN. It's one thing to try to deal with the environmental and financial problems that exist NOW, from what Socialism and immigration has wrought. Were the state still majority white, as if it were the early 1990s still, the problems could possibly be dealt with, in a 1st-world, civil, and somewhat unified manner. There'd be some major pain involved, of course.

That state is beyond that. With the white middle class tax-mule/1st-world-competent-working-man leaving in droves, does anyone think the melting-pot-of shit-fondue that California has become is capable of anything but internal squabbling about who gets the gimmes. "Sorry, we're all out, folks. You chased out the white middle-class, so... uhhh, stand in line in the morning, and maybe some kind of delivery truck will show up..."

PS: Now that I've read over the Bloomberg article more carefully, at the cost of a 15 mm-Hg rise in systolic blood pressure, I may continue the fisking of this article in another post. The stupid - MAKE IT STOP!

** In our website reviews (man, the blogroll could use some updating) we mentioned this great lady on our VDare review. Her area of expertise is the human factors - environmental, cultural, and some financial - from the immigration invasion, especially concerning her home State of California.

Moderator
PS: That's a very comprehensive post, Hail, of which I've read just 1/2 or so yet. I've seen the graphs before (maybe from you, on unz.

Nice site, too!
Hail
PS "Mrs. Walker states that the only reason California has not reached that huge 40,000,000 in population is that the big amount of emigration from fed-up (mostly) conservatives balances out the immigration of foreigners."

The other thing about this is it is not a new phenomenon, and probably started on net in the 1980s.

Amazingly, due to net emigration the number of White European-origin Christians in California will be about the same in 2020 as it was in the early 1960s, a net loss of millions in the past thirty years.