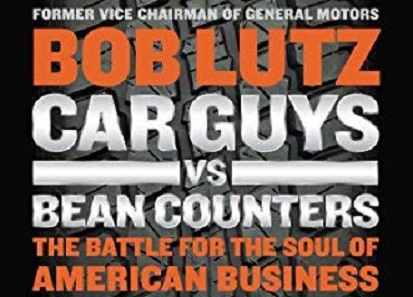 I just read this 2011 book written by Bob Lutz, a 47-year career executive in the American auto industry (GM, Ford, Chrysler, and also BMW). As Peak Stupidity noted in "Master Bullshit Artists", the guy's long career as a muckety-muck alone doesn't convince me that he knows a whole lot about cars. He was not a guy that came up from the assembly line or engineering, as is more the case in Japan. (There's discussion of the Japanese auto industry in the book.)

Just in review mode here for a bit, Car Guys vs. Bean Counters is a fairly short (230 small pages) book that is very readable. One doesn't need to know too much background on the US auto industry, as Mr. Lutz gives a nice summary of the history of it going back a century or so (lots that I've always wanted to know there, too). I learned a bit about the management and different "parts" of these big car companies, and a lot about the struggles from the 1970s onward. However, to me, the very theme of the book was not really proven, and the author has a big contradiction about it near the end.

Bob Lutz had written one of those "How to succeed..." type books before, Guts: 8 Laws of Business from One of the Most Innovative Business Leaders of Our Time, 8 years earlier than this book. I believe he wrote this one just to defend his whole career. It's not that he admits no mistakes, but he's always the good guy, no matter what the results were of the product decisions.

My big problem, starting with the very title of the book is Mr. Lutz' definition of who these "car guys" are and who the "bean counters" are. Of course, by "car guys" he refers to people in the industry who love cars, but that's kind of broad. In this book, these are the people that like the cars for STYLE. Yeah, they may like the sound of the big V-8s and understand something about horsepower and torque, but Mr. Lutz doesn't refer to the engineers that UNDERSTAND cars. The guys on this side are what the industry calls "designers", but that term is not a good one.

In aerospace, the designers would be technicians that work on the CAD system to virtually place all the parts that the engineers have specified. One might think it would be the engineers themselves, who decide how the engine will sit, the configuration of the suspension, and everything. In Mr. Lutz's and the auto industry's terminology, these are the people that determine what the body of the car will LOOK LIKE - it's pure aesthetics. They are the ones that put the tail fins on those late 1950s cars, place chrome here and there, and determine the placing of the Mustang horse emblems. Is that all there is to being a "car guy"? That's the way this book reads.

Now, on the other side, Mr. Lutz thinks of the marketing people and some of the engineers that must make these cars pencil-out economically, with reasonable manufacturing costs (commonality of parts, reduction of complicated stamped parts, etc.) as the "bean counters". There are always people putting a damper on grandiose plans - sometimes they are right, and sometimes they are wrong. Mr. Lutz leans on the side of making the cool cars that stir up the buyers based on emotion, and let sales due to emotions get to where the models ARE worth making.

All this conflict within General Motors (Bob Lutz's management there being the main part of the story) was not an existential threat to the company and the industry until... the 1st oil "crisis" of 1973. Things became much more serious when the Japanese automakers made big inroads with their smaller vehicles, and the politics of this for the next 40 years is the subject of the rest of the book and the 2nd part of this review - tomorrow, I guess.

Moderator
PS: As an expansion of what I learned about in Lutz's book, I'll try to get that one, if you recommend it. My mechanic friend told me that the Hyundais, after their bad start about 20 years ago, have got their quality to the same level of the Japs, but without the reputation yet. You can save $5000 or more on the same type vehicle this way - that's his opinion, anyway.
BernCar
PS: I read "The Reckoning" by David Halberstam about thirty years ago and thought it was a very good account of US vs Japan automakers during the 70's when the Japanese automakers were just coming into the American markets. It illustrated the difference between the two "mindsets" involved. One thing I've always remembered from the book was Halberstam's prediction that the Koreans were going to do to the Japanese automakers what the Japanese had done to the Americans. I think about that every time I see a Hyundai, which is quite often.