Hanging up in style

Do you hear me now?! 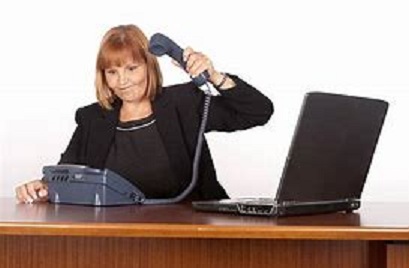 Just as a quick continuation of the curmudgeonry of the previous post, I really do miss the ability to hang up with gusto. It's really needed now more than ever, with all the robo-calls and other wastes of our time. We've got caller ID for some of that nowadays, though they are getting pretty slick - using phone numbers of the same area code and prefix even - how do they do that? I tell you, if it weren't for the H-1B visa immigrants, what would we ever do?

Still, there are plenty of calls that we intended to answer but often end up intending to terminate with extreme prejudice. Wasn't it a stress-reliever to just slam that big receiver down onto the base of those big old desk phones? Even the ones on the wall would suffice for this, though you did need some good mounting to the sheetrock. I'll give the old monopoly Bell Phone or AT&T, whoever they were, kudos for specifying those solid American-made plastic phones. The engineering specs probably required a "hard hang-up" stress test as part of the quality assurance process.

Did the person on the other end ever hear that big bang that we heard on our end? We would have liked to have believed so! (The movies would have you thinking that the one on the other end would immediately hear a dial tone. That was wrong, and I don't know why they would keep getting this wrong through decades of scenes such as Mr. Floyd calling Mrs. Floyd - OK, not a good example with the long-distance operator involved.)

Well we can't do this anymore. It's maddening. You get some asshole trying to sell you a warranty for a car you don't own is running out, or some city government guy saying you need to quit working on your car out on your own driveway, or your neighbor never returned the cup after you lent her the proverbial cup of sugar ... (whaaa?) "Yeah, well, you're the asshole. Call me again and I'll take your head off and shit ..." Swipe, swipe. Hmmmm, it's bringing up fucking windows now ... Swipe. Oh. "... down your ..." dainty little pinky swipe "... scrawny little .... Do you still hear me now?"

But, we can now do this by the side of the road in traffic on our bicycles, thinking our wife had called about an emergency, so, again ... there's that ...

"using phone numbers of the same area code and prefix even - how do they do that?"

With an Asterisk PBX server, you can put any phone number you like in the outbound caller ID field.