Possibly our topic key Global Financial Stupidity, should have an offshoot for just the American part of it. Most of the posts have discussed America's and Americans' finances. However, though declining, our economy still impacts the world. We'll just stick with this key on this subset of stupidity that Peak Stupidity has not visited in a while. The student loan business will be discussed specifically in an upcoming post.


You can see why student loan debt is a biggie: 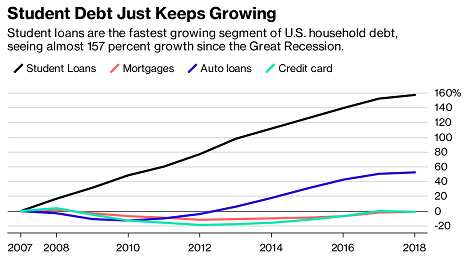 Hey, the really big area of consumer financing, the mortgages, along with CC debt, doesn't look like it's a real problem. It sure helps, for the former, that one can still get loans at 3.5 - 4% for a house. (Yeah, the banks get their money a lot cheaper at 1-2%, so don't worry too much about them.) Credit card debt is one I'd have thought would be worse, but then I'm a Zerohedge reader (more about ZH in a bit).

That auto loan debt doesn't look that good though. It's not like the population has grown 60% in a decade, though it's not for lack of trying by the implementers of our immigration-invasion. Zerohedge had an article a couple of weeks back about the growth in the PERIODS of car loans - "Auto Loans Stretch To Eight Years To Accommodate Irresponsible Car Buyers". Do a little reading of the posts under Peak Stupidity's Economics topic key, and you'll soon see that we are in agreement about the irresponsibility. You undergo 5 decades of Socialism - what in hell would you expect, really? Zerohedge laments:

About a third of all US auto loans issued today are stretching out to seven years, according to the Wall Street Journal. By comparison, a decade ago, the seven-year loan only made up about 10% of all loans.

Why? Because that's the only type of loan increasingly more Americans can afford to amortize.

The longer loan durations are a clear sign that the American middle class is growing broker by the day, and, as we pointed out in our recent article about millennials putting items like sneakers and sweaters on installment plans, the US consumer's creeping debt burden is, among other things, the result of auto prices growing rapidly while real incomes have barely budged. It is also the result of little to no financial education piled on top of a pathological shopping addiction.

Despite so-called hedonic adjustments, new safety and technological features being included with vehicles, like larger and more intricate multimedia displays, have made even the most basic vehicles unaffordable... without the help of debt that is. And of course, in true debt-laden American fashion, broke consumers are also drifting towards higher priced vehicles, like SUVs.

Haha, sneakers and sweaters on installment plans? In my day, it was the Red Ryder steel wagon or Schwinn Sting-Ray bike. Sneakers were cheap, and sweaters were gay. On, and we weren't grown-ups.

Now as an aside on Zerohedge, that site is written by the black-pilled, formerly called "Debbie Downers". A commenter on unz gave more info. that I need to put in the ZH review, along the lines that the site came on big during/after the crash of '08. Many of the commenters were people from the financial industry. I can vouch for that, as the talk under most of the posts was about detailed financial matters. As was discussed in "The Non-Science of Economics", the hypocrisy of some of them was that they were discussing ways to still make money in the very markets that they rightly criticized as rigged (by the FED, etc.)

Financial folks shouldn't be Debbie or Tyler Downers, as that's not good for sales, and, anyway, were they still employed, they'd be making money whatever their specific financial markets are doing. That's the whole thing about the F.I.R.E. "industries, excepting, perhaps the Insurance sector. They all make money on the ups and the downs. "The market's crashing, you say? Fuck you, pay me! (my commission)" "Oh, the whole block's turned dark and dangerous, and you need to sell in a hurry for a loss? Fuck you, pay me!" It works great! Why so down, Paulie?

Anyway, if you keep up with ZH daily, you will be surprised to hit each new year without the collapse of the US dollar, gasoline delivery trucks being driven by Mad Max and some Feral Kids, and the local neighborhood militias patrolling the streets. Still, the numbers don't lie. Where were we? Let's show ZH's auto loan graph: 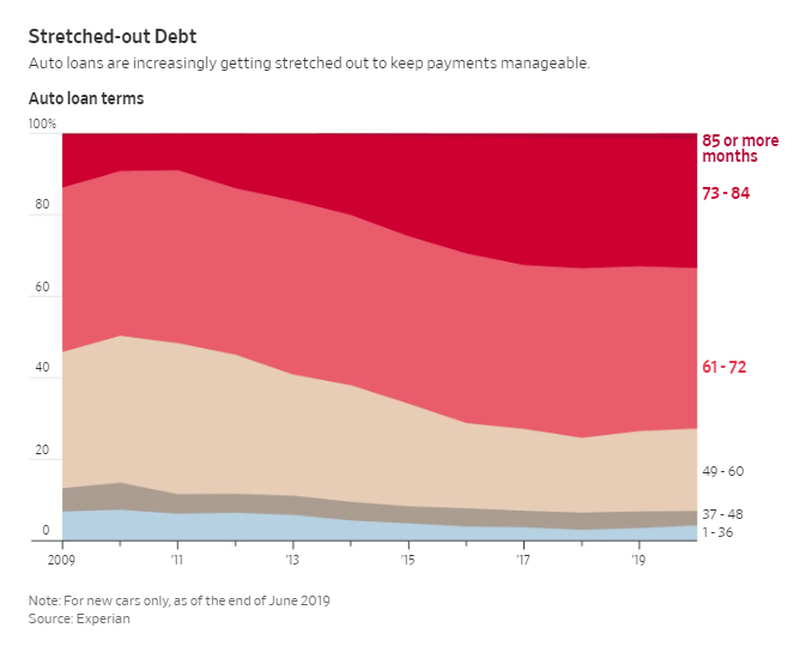 The article give a number, that the average car loan pay-off period is 69 months. That's 5 3/4 years. Just eyeballing off of this, one of the better of ZeroHedge's normally worthless graphs, I can get the opposite end of this, that about 35% of loans have terms of > 6 years (bottom of the dark red).

Look at the black line in the top graph, though. There's your black pill. Though these loan "markets" are not of the same size, the $1.6 Trillion student loan market is a big worry. The economic stupidity and the politics, as in forgiveness, will be discussed in the upcoming post, hopefully by end-o-bidness-week.

Moderator
PS: Doh! Talk about your stupidity. I can't claim it being late, so I don't know what I was thinking (concentrating on trying to it the y-axis correctly with a straight edge on the screen).

Thanks, BC. I corrected it and took out the part about median vs. averages.
BernCar
PS: In next to last paragraph, it looks to me that about 65% of loans have terms of LESS than 6 years. Maybe I'm misunderstanding what you're saying there. That's more consistent with average period of 69 months.