"Go ahead and visit Vatican City, " 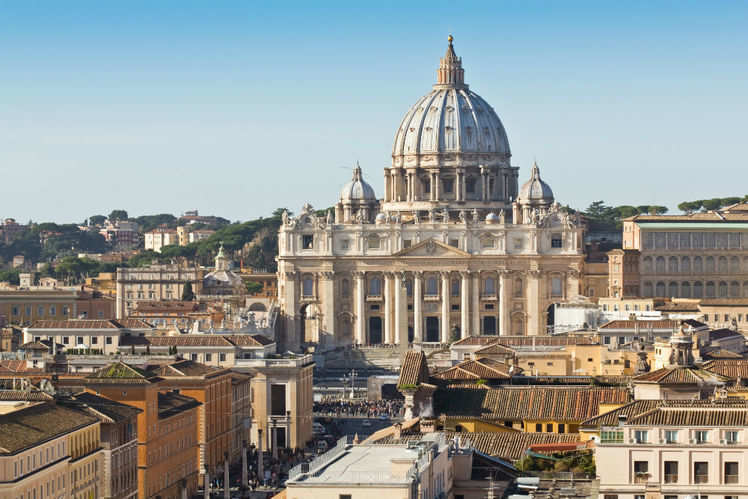 I tell ya, get a Tom Petty song in your head, and it's pretty persistent. I'd rather tour his home country of north Florida than the house of the Rising Sun Commie Pope, R.I.P. Tom Petty. The former is normally easier, but we have been in the eternal city for a few days - that'd be Roma, Italia, and though the latter is a couple of miles away, it looks like we will skip the so-called Pope's walled-off city.

Granted, it's partly that we've already done a lot of walking and children can't always keep up. It's not like the Vatican is that old, either, the palace itself being, let's see, CCCXXVI - (- XXIX), carry the V, add the ... what the? ... * years younger than the Roman Colosseum**. However, I'd rather not give another funny colored piece of my tourist "dollar" to the house of this ignorant Commie. Were it Pope John Paul II, a man who was instrumental, along with Ronnie, Maggie, Lec, etc, in ending the Cold War, still living in the Vatican City, I'd make a special effort to visit. Right now, I just don't have the stationary supplies for a good sign, saying something like "Is the Pope Catholic?"

We made it at least to one nice Italian restaurant of the style you'd see in the movies. As we ordered some anti-pasta, I had to explain to my boy what that meant. In fact, I gotta admit that I thought the same as my kid, as if this food is "against" pasta, as in some sort of battle of the digestive tract. No, per the menu, this "anti" means "before", so one eats it before the pasta. That's what we did. As for the so-called Pope, well he's most certainly not from before Christ, so his being a potential AntiChrist is not at all like the benign AntiPasta.

The wife gets upset when I get too political while on vacation anyway. We'll let so-called Pope Francis be, this time around.

* More on Roman Numerals in a post to come.

** The Wiki date for the inauguration and finish dates of the Colosseum do not match what we saw there. How can that happen? Are we talking about the same Colosseum? I'll trust the signs inside the actual one over the internet.


Moderator
PS: You indirectly reminded me of why I have the "AntiChrist" tag with this post - I'll have to put that paragraph in now.
Moderator
PS: I've got a few, pics, Ganderson, that won't pin me down by identity, but we can't get them uploaded. One of them would be perfect for a post coming up on the Chinese tourists.

Yeah, too many Achmeds up that way. I'm still waiting on some dualies (instead of selfies) from you with Anni-Frid or Agnetha.

Ganderson
PS: Greeting from about 1200 miles north. Lots of Achmeds up here...

Good on you for snubbing His Commie-ness. See if you can post a pic of the spot where Caesar’s insula was.