The Treaty of Versailles - signed a century ago ...

... plus one month and one day. (Hey we're tryin' ta keep up, I swear! It was this post by "Audacious Epigone", with some discussion below, that even reminded me of this anniversary.)


The Hall of Mirrors in the Palace of Versailles
(pronounced "ver-sales", if you're in the vicinity of Lexington, Kentucky): 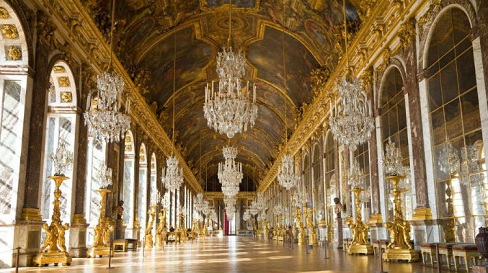 The armistice made that stopped the bloodshed of the "War to End All Wars" (also called just "The Great War" until WWII) was over 6 months earlier, as remembered and memorialized as The Eleventh Hour of the Eleventh Day of the Eleventh Month.... Negotiations on the treaty have been going on that long. As the treaty was signed, it happened to be 5 years since the shooting of an Archduke in Sarajevo, Serbia, one Franz Ferdinand, heir to the Austro-Hungarian empire, one of three great empires (also the Ottoman - Moslems, and the Russian - due to the Commies).

Though the Americans had only fought during the last 1 1/2 years of the war, this help made the difference as the Germans had made a big offensive since the Russians had quit fighting the eastern front 8 months before the armistice. President Wilson, Mr. PhD know-it-all, having been already responsible for a lot of American domestic destruction, tried his hand at rearranging the people and borders of the world there at Versailles.

It had truly been a World War, and countries and (many now-former) colonies all over the world wanted to get their due share, in their leaders' views at least, of the spoils. Just as an example, a man named Ho Chi Min - you may have heard of him since - came to Versailles (he'd been living in France most of his life anyway) to petition Mr. Wilson for the treaty to include and ending to the French rule of what was called French IndoChina at that time, later on Vietnam.* He was able to get a letter to someone, but Mr. Wilson basically blew him off. Truly, as per history-rocker Al Stewart, at this time, "the colours of the maps were running".**

I'm no historian, and there is no room to have a discussion on some of the ifs of WWI, whether the Germans had been ready much earlier in The Great War to work out a treaty with the Allies, why the US had gotten, or "been gotten" involved, etc. The point most history of this Treaty of Versailles will include is that the Germans were just plain boxed into an economic corner with the terms of this treaty. Was it all Woodrow Wilson's fault, with his 14 points? (Sound a little familiar with GHW Bush's "1,000 Points of Light"?) The other allies had something to do with it, but it was Mr. Wilson's show there in Versailles. He brought up the "spreading of Democracy" bit too, which also is very, very familiar, 100 years later. Economic reparations were set up that were odious for the Germans - "reparations", now that's a word you don't hear a lot ...

There are plenty of "ifs" in history, but IF the German people had not been boxed into an impossible economic situation, which resulted in the incredible inflation of the early '20's, Adolf Hitler would have probably not come to power***, or at least to that high a level. World War II would probably not have happened.

Just as an aside, and as a reason for some Al Stewart history rock, as the Germans were going through their terrible times in the early 1920's, the Americans were having a ball. It really helped that we had a string of Presidents that were still leaving the people the fuck alone. One was Mr. Warren G. Harding:

Al Stewart wrote a song about the Palace of Versailles shown at the top too, even, but it was about the French Revolution, 1.3 centuries prior to the signing of the treaty one century ago now. From the upbeat calypso beat of the tune above, we come to a brooding balled. It's not by any means my favorite off of the 1978 album Time Passages, so we'll post some more tunes from it soon.


* Ho Chi Min was no Communist by any means at the time of his petition to meet with the American President 100 years back. Communism just seemed to be his best road forward to work out a way to get Vietnam independent, much later on, as the Japs came, and then the French came back.

** I gotta use the British misspelling there, in respect for my favorite (and only) history rocker, Mr. Stewart.

*** He may have still come to power as an anti-Communist, as Communism was ready to take over the place, but was that only because the economy was so terrible that many felt Communism might be the answer? Even with the Commies, but with no terrible economy and resentment of the reparations, it's doubtful the German people would have supported this madman to that high a position. (Of course, here in America, our madmen have made some decent inroads lately ...)


Moderator
PS: I'll listen to that tomorrow, Ganderson. It's great to hear from some Al Stewart fans.

One of the lyrics sites agrees with me, but they get it wrong a lot too.
Rex Little
PS
Buy me a ticket on the last train from tonight. . .
Ganderson
PS. Between the Wars, from which League of Notions is taken, is a wonderful album- I always though one could make a musical out of it.

Al’s a fave- always see him when he comes to town. His voice is going, but still puts on an enjoyable show.