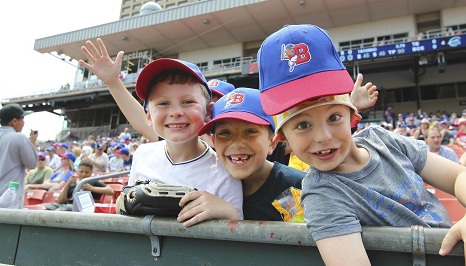 (Kids at the ball park - just a file photo.)

Now, after the previous generally-depressing post about the future of stupidity, or the stupidity of the future, I'll end the week with something greatly more up-beat.

The Peak Stupidity staff are not poor, or even close. We're doing fine for now. At the baseball game tonight, though, a really nice guy just came up to give us tickets as we were about to buy our own. I figured he just had extras to sell for whatever he could get, as the game had started a while back. "How much do you want for them?" "No, take 'em." He just didn't seem like a scammer, and you don't get much of that here. "Well, let me give you something ..." Nope.

The man not only was giving the tickets away just to be nice, but they were extra-special seats, and later he made sure to get us the refreshments on the house ... whatever we wanted. (No, he wouldn't take a refusal on that either.)

"I like to give the kids a treat." he told me, or something to that effect. This was just a genuinely kind-hearted, giving individual. It made me realize that I don't do enough of this sort of thing. Just ragging on all the stupid BS that happens (more and more frequently, or it'd just be a part of life and no reason for a blog) brings out a real distaste for people. This man brought a taste back.

Possibly living only in this way is ignoring the good work in trying to stop, even if only by writing about it for now, the nasty stuff of near-future America. "It's all good" till it's not. Yeah, but you can at least do random goodness for people that are on your side, and maybe doing a few nice things for people on the other side could swing them around ???

Moderator
PS: Now, now, that sounds like some stereotyping there, Mr. Blanc. That said, I don't want to be at the same blackjack table with you in Lost Wages. It's hard enough trying to beat the House.