Price Gouging - Peak Stupidity is FOR IT.

Last week, in the comments in reply to one Bill H. of Anytown, USA, I mentioned that I would write a short post in support of the practice of price gouging during the aftermath of disasters and such. Of course, I don't mean I support scams of any sort, so I'm just referring to the honest, blatant, jacking-up-to-the-sky of prices when supplies get scarce.

This is just a pure Libertarian-oriented post, so if that's not your thing, wait a day for a return to other topics. 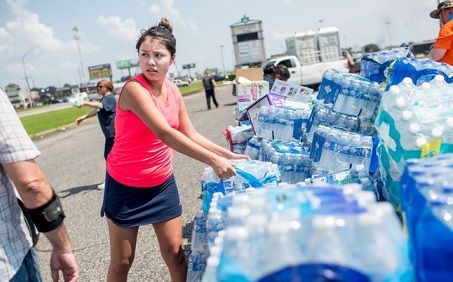 Maybe after the last hurricane, flood, earthquake, or whatever kind of natural disaster seen on TV, the National Guard brought in supplies, including pallets of bottled water, as shown above. Good on 'em - that's the Governor's job. However, when disasters go big-scale, such as what the real "preppers" are preparing for, there won't be that helping hand, available for everyone.

Things can get bad quickly in this world of Just-In-Time and intertwined computer and internet-based logistics systems that make the modern world run, sort of. When the water doesn't run, the toilets don't flush, and the electricity is off, things will become miserable enough even for a prepper after a while. For the rest, they may have notice with alarm that the stores were emptied of bottled water and, well, everything else, either before the disaster even got started, or within a few hours after. We live on the thin edge, people, and the grocery store shelves are only bountiful when the world is running smoothly.

Now, 3 days later, a truck pulls up selling water at 50 bucks a case of 24. (Well, you know how Peak Stupidity feels about bottled water, but that's another story.) "Fifty bucks! What a meanie!" "These people are evil" - that's the narrative today. However, at the normal price, would it really be worth if for them to truck this water from 2 states away? Not even close. "Well, they should do it out of the goodness of their hearts." Hey some do. These aren't the ones. "Oh, then, at least sell if for something to pay for the trip, and that's all." How would that motivate these guys to load up and truck this water from 2 states away?

No, they have every right to make some money, as much as they want, in fact, off of your misfortune. That's supply and demand, not Kumbaya at the Rainbow Gathering. The opportunity to price gouge may be the only thing bringing in this truck with its bottled water for your continued existence. Another good effect would be that paying that 50 bucks a case will be something you remember very well, before the next time around. Maybe you should have kept a dozen cases on hand. It's not like water has a short shelf-life. How hard is it to do that?

I suppose, for some people things like that and, well, life in general, is hard. As the man in the Western (apparently never) said, it's even harder when you're stupid.

Bill H
PS Yes, County. California is blithely referred to as a "blue state," but geographically about 80% of it is bright red. The cities on the coast, and a little bit in the north, outweigh the lightly populated rural counties.
Moderator
PS: Oh, I just realized you meant San Diego Cnty, not you, in terms of the GOP voting record. My record is still what it is ... had enough of the GOPe in 1988.
Moderator
PS: Oh, I didn't want to pin you down on location, Bill. "Anytown, USA" was tongue-in-cheek, and used to be seen on sample addresses and such, in ads or what-have-you.

... until George H.W. Bush spoke about 15 seconds in Spanish in a campaign speech in 1988, for me, Bill! Seriously. I should also add ... "until Trump", and no, none of those were D-squad votes either, just "L"'s or Constitution Party, aka, Chuck Baldwin.

I do get your point that a shortage does not CAUSE a price increase directly, but it's just that since it ALLOWS FOR a price increase with no loss of sales, than that WILL HAPPEN. (Sorry of the all caps - just for emphasis rather than italics.) I think the law of supply and demand is simply an understanding of this. People do want to make the most profit they can. I agree that when it becomes immoral is irrelevant.

Bill H
PS Anytown USA? San Diego CA, actually. California makes me a liberal, of course, except that San Diego County is a pretty reliable Republican bastion, voting Republican in every presidential election until... Well, let's not go there.

Anyway, I don't think I really said that using shortage as a reason to raise prices was wrong or evil, I merely said it was not reasonable. That means it was not based on reason, because a shortage is not a valid reason to raise the price. A shortage permits raising the price, but it does not justify it.

I think there is a point at which a price increase driven by shortage becomes immoral, but I don't know what that point is and I don't care.

The point I was attempting to make was the illogic of California having a law prohibiting "profiteering," that is raising of prices during times of emergency, and yet calmly accepting the "law of supply and demand," in which a shortage of supply is valid grounds for raising prices.