Where Are My Documentos? 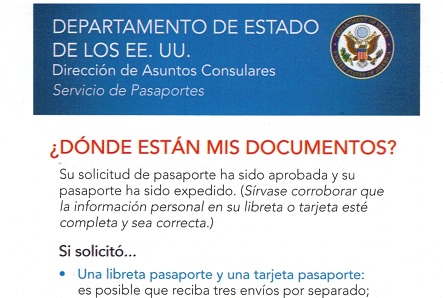 That's a damn good question, Senor.
Where ARE your documents?
If you need to read this in Spanish, perhaps you are undocumented, si??


(No kidding, the above is a flyer from the US Passport Office. What serious
country does this ?)

Some commenters on the good websites are as good, or nearly as good as, the writers themselves, and are pundits in their own writes (homonym error intended). There are the guys I agree with EVERY, or maybe only 98% of the, time that write well too. I've seen great stuff from this commenter with the handle of iSteveFan under iSteve, that is Steve Sailer on unz.com. Under one article of Sailer's comes this great comment by iSteveFan, with an analogy of the > 50 year-long now immigration invasion with the D-day invasion of Europe by the Allied armies on June 6th, 75 years ago. What was the point in defending freedom around the world when you're going to give up you country without a fight 21 years later?

This analogy compares the numbers of the German's impossible defense of their occupied Western European territory with the numbers of invaders upon American soil during this slower, but just as deadly in the long run, invasion. As the comment wrote afterward, this analogy is a good one to bring up to older patriotic Americans who maybe just don't get it. I should say "just don't get THEM", the numbers that is.


It’s brilliant. Just watch this play out over the next couple of weeks. It’s the first great move by Trump in awhile. [NOTE: This was from another comment, and the following is in reply.]

I disagree. Every day we are taking in over 2700 LEGAL immigrants. That’s over 1 million a year. Currently we are getting tens of thousands of illegals per month. He has done nothing to change this. I think the only area where he has done some good is in the reduction of the refugee resettlement program.

Since we remembered the 75th anniversary of D-Day earlier this month, let’s use that as an analogy to what is happening to us today. Over the course of 4 weeks, from the invasion to the 4th of July, the allies landed 1 million men. They averaged landing over 35K men per day over this period. Of course the landings continued after 4 July, but this was the approximate date we hit the 1 million mark.

If you were a German officer in France in June 1944, you received reports that the US Sherman tanks were not very good. The Panzerschreck, and Tiger and Panther tanks took a toll on them. Your men told you how many tanks they took out on a daily basis. However, you knew it meant little so long as the allies could land 35K men each and every day nonstop. Eventually they would overwhelm with pure numbers alone. And that is what happened.

This is our position today. You might think Trump acted brilliantly in this action. Or you might be happy about some of his policies which have been good. I like his attempts at trade adjustments and court picks. But I know so long as the other side lands 2700 legal immigrants per day, and a like number of illegals per day, we are doomed. We’ve already allowed them to land 60 million since 1965!!!!

We can’t continue down this road. Either Trump reverses this tide and starts to send them back, or we will inevitably march on to electoral and demographic oblivion.

And no, he does not need to round up everyone. I posted this link before, a good piece in the Christian Science Monitor from 2006 about Ike’s Operation Wetback and how the illegals self-deported when Ike cracked down. Border agents only nabbed a few thousand, while almost a million self-deported when they knew the jig was up.

The bottom line is the other side is landing thousands of new troops per day and so far that has not been reduced at all. The killer is legal immigration, which enables illegal immigration since it creates pockets of foreign nations within our own, which allows the illegals to “swim among the fish” and avoid standing out. So long as they are allowed to land this many troops per day, we are like the Germans in June 1944. No matter how good they were individually, or how good their equipment was, they could not overcome the allies’ numbers. And we won’t be able to overcome globo-homo’s numbers either. We should have put our collective foot down years ago, but no one wanted to listen to Pat Buchanan.
**************************************

To convince numerate people, which is not all Americans, by ANY means, but still a lot, you must give them numbers. Peak Stupidity has taken this tack in writing about the , wait, a border wall over 2 years back, in Border control vs. the interstate highway system and Border control maintenance vs. defending some Koreans from other Koreans.