Please skip this post if a) you are not into the Peak Stupidity pet peeves of the week, or) you don't like basic physics. I promised this post, I like this stuff, and Gosh-Darn-It, I'm gonna damn well write it.


I'd take surfing over CNN by a long shot, but, still, NO TV! 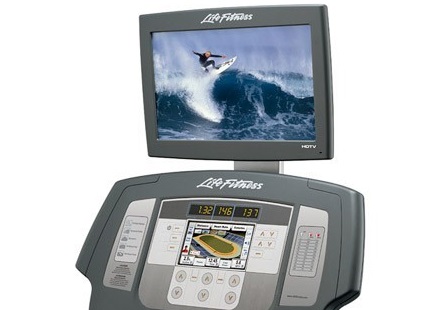 We discussed the mechanical problems with the otherwise-sound China-made Sears exercise bike last week. While traveling around lately, I've gotten to sample a whole gamut of different workout machines, with special attention to the treadmills and exercise bikes. It's a better way to shop than even the store and the on-line reviews, as I've been using these machines.

As I wrote in that previous post, there is mechanical soundness, and then there is the display/electronics portion, to be looked at in judging the usability of these machines. It's pretty easy to feel the looseness in parts and hear scraping, grinding, and all sorts of other noises and feels to observe mechanically crappy stuff, though, granted some of these have been used more than others at the time I use them. If you're going to buy a mechanically sound one, then the electronics display AND calculations are important. Some of these damn things are annoying due to having SO MANY features, and of course the TV on top is not something I'm gonna want to pay for. (Sure, I could take it off my own machine, but I just don't want to pay extra for its cost.)

Next, I don't want a display in which the numbers toggle back and forth every 10 seconds, because, well it's just annoying, but I don't mind lots of numbers up there. Those all help me concentrate on my goals during the workout.


Simple and useable, but ... are the numbers right? 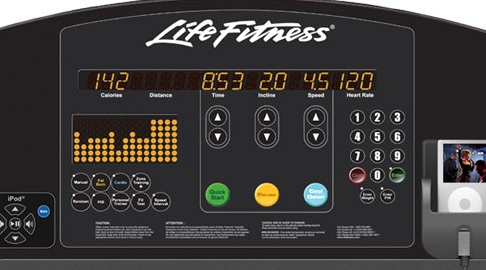 OK, fine, and then there are "busier" displays with touch screen toggling in which one can make whatever is more important prominent on the screen, with cool fake gauges, or fake 1/4 mile tracks, and even the go-pro-camera- )or motor vehicle-) taken video in which your ride the bike on a course. Yeah, it sounds a lot like TV, but, in fact, there is NO sound, and no distractions. That's all very well, and I have a few favorites, were I to buy one of these expensive machines. But, but, ... the physics.

Here's the part that may bore the reader. [You have only a minute or two invested in this post, so bailing out now may still be worthwhile - Ed] OK, the point in using an exercise bike and/or treadmill for me, rather than a run/ride outside is to get an intense and very controlled work-out in for cardio. The point for me is to reach some goals, and the numbers need to be, if not exactly accurate, CONSISTENT. Calories burned are not as easy as one might think, even if one enters his weight per the prompts. That's not what I need so much, though. I simply want the goals, such as x number of miles in 20 minutes on the bike to be attainable consistently, and it'd be nice if Wattage or METS would be accurate to judge power.

For the treadmills, well, so long as the the incline angle is correct (hard to screw that up, if the machine starts level), the speed is, and the heart-rate readout that I look at, at the end, are right, then that's all I need. Calories burned are another story, and a subject for another post that you may also want to skip. ;-}

On the bike, here's my beef. I start off slow to warm up, so I rightly get behind on my goal, per the machine's display. Fine. As I speed up, usually the "speed" goes up linearly with rpm, the least they could do. As I adjust resistance, some of the bikes see that as an uphill run, and show an increase in power (W, METS, kCal/hr, etc.), as one would have if not slowing down. In this case, I have to use vertical climb, if available, or calories burned, as part of my goal, as the speed will only go up with rpm's and one can only pedal so fast (90 rpm is about tops). That's all fair, but I like the other type of interpretation - most of the bikes act as though a change in resistance is like an increase in the gear ratio (sprocket ratio, really), as in a real bike on level ground. I like that better, but dammit, sometimes the speed will not go up linearly with the increase in my torque (how do I know, I can feel it). That's still workable, but, worse yet, I'll see the speed go up on the display, but notice that I am NOT catching up or even falling behind on my 5 miles/20 min goal, even when faster than 15 mph (the average for that goal). The numbers are not being calculated correctly.

The method of creating resistance to force the exerciser to generate more torque may vary between being friction-based, electrical-resistance created, or air drag. I don't see it much, but that's one thing I really do like about the Sears bike that I wrote about (still not grinding the bearings, yea!) That one uses a 20" or so wheel with paddle blades to dissipate energy via air drag. As opposed to especially the friction methods, I don't see much of a way for this resistance to change over time or temperature or wear of the machine. (Possibly dust on the blades is a factor, increasing drag). This would all be great if the manufacturer had gotten the calculations right. They absolutely have not!

It would be a fairly difficult project to calculate the drag on those blades. Even for one blade, an aero expert may take a few days or so to model it and use CFD software to come up with good numbers, which would still need to be tested in a wind tunnel to prove them out. How about 8 blades, one following the other? A better way, completely experimental, would be to measure torque as the paddlewheel is turned with an electric motor.

Even the latter is something I wouldn't expect the company programming the chip that displays an exerciser's workout numbers to do. I don't need to know the actual torque as much as I just want the display of calories being burned or watts of power to go up in the right proportion to how fast I pedal (see, this resistance is not set separately, of course, it just goes up with the speed.) Here's the deal: Drag goes up proportionally to the square of air speed. Power in rotation motion is equal to torque x rotational speed* (just as in linear motion it is the force x linear speed). Since the drag (hence, torque) goes as the square of the speed, power being exerted goes as the cube of the rotational speed. If I pedal twice as fast, I should be burning 8 times as many calories per hour, and putting out 8 X the wattage.

Nope, though, the thing doesn't work like that. It's not like there's anything difficult required mechanically, as all they needed was a couple of magnets that go around and a sensor. That's it! You get not-quite-instantaneous speed, and the rest can be obtained from that. You program it on the chip that runs the displays. The stupidity, to me, is, why couldn't they get this right? It would take not but a few hours of an undergrad mechanical engineering or physics student's time. Pay the kid 200 bucks to give you all the math you need to make your product. This goes for all those machines, such as the treadmills that don't show any higher rate of work (calories/hour or watts) when the slope is set higher.

This is NOT rocket surgery. Just get someone to do the math right, and you program it in, and that way I can get a fair workout.

(Well, as I wrote up top, you may be sorry you read all this. More politics will come soon enough, but it's my blog, and I wanted to get this off my chest. Hey, I should be happy the machine still works, I know ...)

Oh, these displays are quite a bit busier than the ones with the LEDs, but I kinda like seeing all those numbers, and the track's cool: 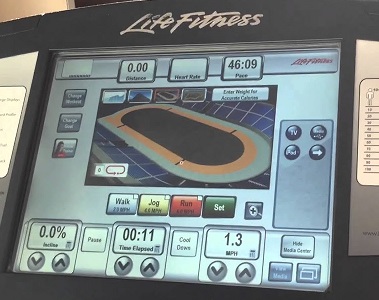 * From the derivation one would see that the rotational speed must be in radians/second. 1 rad/sec = ~ 9.6 rpm.

Moderator
PS: Haha, BernCar! .. and good to see you back on here commenting.
BernCar
PS: You young'uns are spoiled rotten. Back in my day we had to ride real bikes out in the elements while doing our computations with a slide rule. That's why we had bicycles built for two. The guy in front with a slide rule, guy in back with log tables.