Tiananmen Square and the American Press 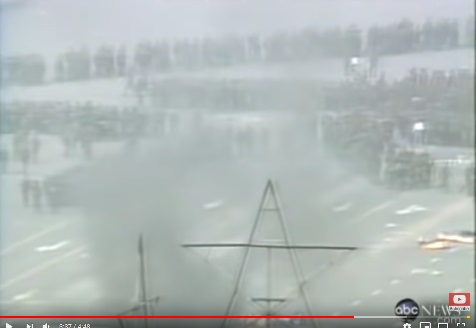 Since our 1st post on the 30th anniversary of the Tiananmen Square movement, I've read a little bit of revisionism, pointed out by Ron Unz on his site, referring to an article from a decade after the protests and violence. This post is just a quick comment on that.

One Jay Mathews calls the whole thing a myth, but pretty much all he had to say was that the violence wasn't all in the square, most shootings by the Chinese army were in different locations, and that more rebellious workers were shot than students. Okay, fine. I do remember that the local workers supported the students, and the Chinese big wigs would have been much more worried about the movement going countrywide at that level. There were, and still are, a cool BILLION Chinese workers, but you can always kick a few 10's of thousands of students out of school - for good. Now, that I've read it, I see that Mr. Mathews' article name, "The Myth of Tiananmen", is itself a load of misdirection!

Keep in mind, CNN had not gotten all it's Lyin' Press mojo up yet by 1989 and all those reporters wanted to film, film, film... live footage of shit happening in China. Mr. Mathews, during the Clinton administration, was part of the pro-China slant that is nothing but the extension of their century-long pro-Communism slant.

Through the smoke and confusion at the time, and from 30 years of confusioning of the story by various parties with different agendas, I can't say I know the whole story, but I get the gist of it.

Anyway, one would have to BE in China and speak to lots of people who were there (not necessarily in Peking, as the movement was widespread) to get the details. 30 years later, even in China, you'd have to weigh the stories carefully. This is all nothing new - my Dad told me, well it was many years ago, "Believe half of what you read and one quarter of what you hear."

Moderator
PS: Ron Unz would have one believe that the Lyin' Press has been the same throughout all of American history. He's pretty far down the rabbit hole sometimes, almost TOO openminded, if that's possible. It's hard for all of us to separate the change in our naivety from a real change in the world.

I think mainly it was that the journalism world was not entirely filled with people working on an agenda yet 30 years ago, as it is now.
Moderator
PS: Yeah, BC, I guess we are reading lots of the same stuff on unz. (There are so many posts, and easy, well-organized commenting, that the site is plain addictive.)

That was earlier than my experience, as far as seeing lots of Chinese students - different locale may simply be the reason. I noticed more students only toward the end of the 80's at the graduate-school level, and hardly any still at the undergrad level at that point - well, it wasn't Princeton though....
BernCar
PS: Also noting the current protests in Hong Kong, I am aware of a big difference in my attitude toward news coverage today as contrasted with the protests in China thirty years ago. Thirty years ago, I believed the broad outline of what I was reading in the papers and seeing on tv. Now, I would not venture an opinion on the protests one way or the other because I treat every word or image from the lamestream media with the same skepticism I would give a promotional brochure from P.T. Barnum.
BernCar
PS: Yes, I also followed that link from Unz to Matthews' article thinking I was getting a big revision in history and I had the same reaction as you--OK, many people were killed two blocks over and not in the square. That doesn't qualify as a massacre? Is it fake news just because the location was off by 100 meters or so? The headline (and this was in the Columbia Journalism Review, mind you) was completely misleading. It certainly didn't exonerate the Chinese government as the lede paragraph seemed to imply.

Also, I noted many Chinese students in graduate math/engineering classes in the mid-80's--sometimes I was one of only two or three non-Chinese students--and every damned one was studying material science!!??