Freedom in China? On the Tiananmen Massacre 30 years ago. 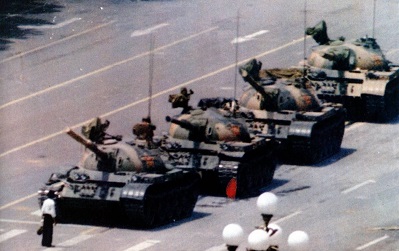 Peak Stupidity just CANNOT meet the deadline on , OK, remember, most of these anniversaries of historical events in time for publication date. Here's another that I even downloaded a few picture for last year to use them on June 4th of this year. Sorry, but it's just gonna be this way often and probably doesn't matter much except to me. I do remember this event fairly well though and can place it somewhere around the time of that Loma Prieta, California earthquake [Just checked - got the year right at least, haha, but it was in October. - Ed]

There are revisionist Commies right on unz.com and I'm sure all around the web as they've been crawling out of the woodwork, who will tell us that this Chinese flowering of freedom protests, along with a subsequent serious crackdown. were just all made up. I really don't know why anyone thinks our Lyin' Press, even of the late 1980's ever had, or now has, an anti-China slant. Communism was promoted until the horrors and deprivation couldn't be hidden anymore. Americans sent corn to China even during the dark days of the Cold War in the 1960's as Mao was causing millions to starve. (OK, feed corn, but still...)

Late spring of 1989, when the democracy protests started up in China, was also during the heyday of not-quite-infotainment-yet CNN. Live photos of such an on-going political happening were such a new and cool thing 30 years back. I'm sure, sympathies aside, the ratings were well worth showing things that vindicated American Cold War winners. It was a hell of a time to be a Cold War winner too. The USSR had fallen, and most of the East Bloc had also, or was in that process. Yeah, Cuba was still in the midst of its ongoing "revolution", and there were a few problems down in Salvador and Peru. That was all kid stuff, though, compared to the biggies, the USSR (GONE!) and Red China. To think that billion-person Communist land could turn around in a virtual heartbeat of history as the USSR had, made us very hopeful about the goings on in Spring 1989. Change was coming, "Right Here, Right Now", at least right there on the color TV!

There had been a building movement since May 4th of the year. May 4th is famous day in exactly one century-old Chinese history, also missed by Peak Stupidity (but we lay no claim to be all-China 24/7). There had been a big student protest, unoriginally dubbed the "May 4th Movement" 70 years before our subject here, also in Tienanmen Square in Peking, Really the "Tienanmen Square" protests were a copycat in method, but not in demands.

The demands 30 years ago were more openness in government (yeah, right, under Communism, OK?!), and the usual. By some point, say, when the Lady Liberty statue was brought out, the students had gotten bold enough to talk about democracy and all that jazz, which couldn't have sat well with Chairman Deng. Deng must have felt they were a bunch of ungrateful Chinamen (AND Chinawomen) to be demanding anything, after he had help get the countries economy going on the first decade of an amazing rise, by allowing free markets in some industries in some areas. 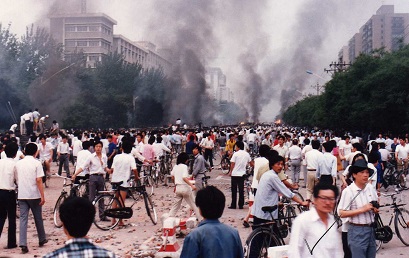 The Chinese students went for it all, which was what gave Americans hope that this could be another fall of Communism (the biggest, population wise, though, in 1989, the USSR was by far the biggest, military-wise). It was not to be. The crackdown on the protesters had started, with arrests and shootings by troops, and later executions, well before the famous picture up top, with the gentleman blocking the tank. How many people were killed, arrested, and/or executed later I don't know exactly. There were reports at the time of thousands executed. This attempted peaceful movement was spread throughout China, not just in Peking. I found out years later of someone only known to me 2nd-hand had been kicked out of his university as a bright electrical engineering student and barred from further entrance to school, ending up as a TV repairman. Hey, it's not execution, by any means, but still repression at about the level we are coming to here in 2019 America.

I really meant for this post to go into China and ideas about freedom, but that'll be a 2nd part for tomorrow's blogging.

Moderator
PS: Haha. McDonalds and KFC are very big there. There are signs with Colonel Harlen Sanders all over, H.M.. I wouldn't be surprised if, just as many American may believe General Tsao was bigger than General Sun Tzu, you know, the guy with all the military strategic advice you keep reading here and there all over the internet), the Chinese figure that Colonel Sanders was the guy that ran the Flying Tigers operation flying materiel to Chiang Kai Shek over the hump!
Heidi's Master
PS That guy in the famous photo had stopped the tank just to ask for directions to the nearest McDonald's.