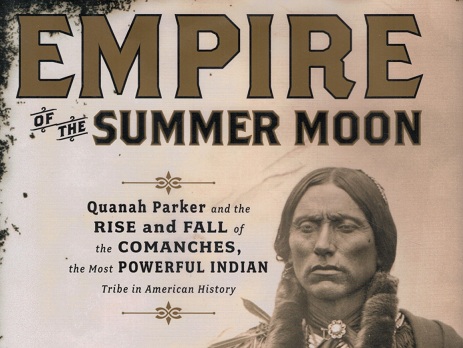 Peak Stupidity left off in Part 2 of this review, a couple of days back, with mention of the Comanche-kidnapped 9-y/o Texan Cynthia Ann Parker and her 1/2-blood, full-spirit Indian son called Quanah.

Cynthia Ann Parker was one of the luckier of those kidnapped by Indian tribes. Rather than being (partly-literally) dragged around the plains with the tribe, as her cousin Rachael Parker was (who died before any white men had caught up with her), or having been just gang-raped, tortured and killed and scalped, Mrs. Parker ended up being married to a Comanche chief. This chief, the father of Quanah by way of Cynthia Ann Parker, was like other Indian chiefs - it was not some kind of formal, elected, or even appointed position. A Chief was just an Indian brave who was better at hunting, killing and stealing horses than the average brave. That's all there was to it. Now, had Mrs. Parker been taken as a wife by some average Indian man, perhaps she would not have been as happy with her status, even though Indian chiefs would have multiple wives anyway. The end of the story may have been different though. 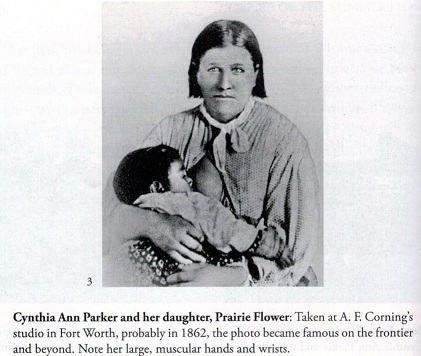 After the barely-recognizable-as-white Mrs. Parker was found on a horse, as her Indian husband had just been killed in what was later said to be just a small skirmish with the remnants of a band that had headed away from their army/ranger pursuers, she was not at all happy being brought back into the White man's world. In addition to being in a severe state of grief over her dead husband and lost two boys (one of which died later with the Indians) and the other, the future-chief Quanah, she did not want to go back.

Cynthia Ann Parker did have memories of her time as a white girl, including of the terrible traumatic raid in which she was taken to a different life. A quarter of a century later, she was brought back, first to the frontier, and later to some bigger towns to the east. She was never happy being back in civilization, even after the cessation of her escape attempts.

That to me is the real theme of this book. Beyond the great sweeping descriptive history of this violent clash between the two cultures, the question of how one could want to live like a savage comes up as one reads the book. Life in the plains Indian culture is described well, and not at all in disparaging tones. It just was what it was.

The ultimate freedom of life on the high plains, with the buffalo and warfare being the whole point of existence, with customs and protocols, but no real laws, no courts, no fences, no taxes is really something that takes some imagination to see the beauty of. The downsides are many, and those of us in civilizations (> 90% of Peak Stupidity readers, I would hope) can see those right away. Disease of any sort could simply mean death, with no hope other than in superstition. Months with no buffalo (another reason to have hated the white men - the buffalo sport hunters) could mean death for everyone. Bad weather could kill. It leads to this: It may have been such a great feeling at times to live in that world, partly because there were no changes in the meaning and way of life, but that's just the problem too - there was no such thing as PROGRESS. Life was what it was, and nobody was going to change that. Sure, some years might bring many successful raids and killings and stealing of 1,000's of horses. That wouldn't change life though. Nothing would or COULD ever improve.

With that amazing freedom to live only bounded by the whims of nature, one lived as an animal. I don't mean that in the sense of intelligence. It was just the freedom of life as an animal (with better tools, slightly better...) with the savagery that comes with it - no thoughts existed about "oh, is it really RIGHT to kill these people who've done us no harm?" or "How can we improve life for the more miserable among us?"

See now, people within a civilization have lost that freedom. Though, as mentioned before, the women in Indian society did pretty much all the physical drudge work, Cynthia Ann Parker had gotten used to a life closer to being an animal. True, she had a husband she could be proud of (Exactly, animals don't get married, haha), and that made her happy, along with her children, of course, as is the case for even the civilized "animals". She took to that life as close to the animal world as one can get. As I mentioned, perhaps if she hadn't been married to a chief, maybe she would have hated it more and been glad to have been back in civilization. Her attitude, though, was a mystery to all those back "home", as it was unimaginable, just like the look on John Wayne's movie-daughter's face was when she was found, on The Searchers.

It is unimaginable to us that a life of savagery can be desired over a life in a civilization. The millennia-old ideas of rights, property, the golden rule, and laws to uphold them are the only way a culture can progress. There was no way the Indians were going to progress, though in their culture there was nothing wrong with that. Conversely, there was no way the white man (along with other civilizations elsewhere) was going to let nature take its course on mankind at will, forever, and a lack of any progress has been unimaginable to us. Once the White man set foot on the American continents, it was not possible that there would not eventually be a clash that would end one culture or another. In mid-19th-century Texas, it was no sure thing which would prevail. 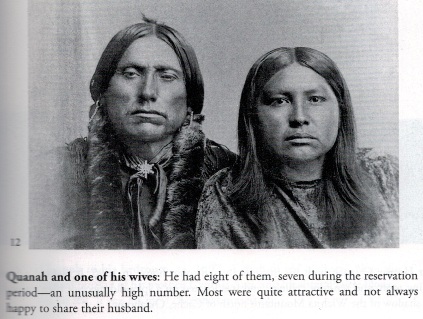 That was about a wrap-up, but I did forget to mention Cynthia Ann Parker's half-Indian son, Chief Quanah. I put a big "C" there, as he was the 1st chief to truly speak for most of the Comanche tribe. Unfortunately, this was after his capture, years after his mother's return to civilization, and near the end of the life of the plains Indians, as they knew it. It's only the last 10% (a guess) of Empire of the Summer Moon, anyway, in which Quanah's story of his life as a wild Indian and later political deal-maker and benefactor of the turn-of-the-20th-century reservation life is told. Please read the book, as it has lots of good words for this amazing man, along with all the rest of this long-lost history.

Moderator
PS: Thank you very much, Mr. Christian. See you on the unz threads.
Jim Christian
PS
Good reviews, Achmed! Excellent!
Moderator
PS:. Yeah, it's a good read, Ganderson. I may look for "The Wars for North America" - gotta feeling it's a long one, but if it's interesting, sure. I read Keegan's book on WWI about 15 years back, and enjoyed it.
Ganderson
PS I’ll be reading this book. I might also recommend John Keegan’s The Wars for North America. It has a big section on the Wars for the Northern Plains, and covers much the same ground.