Which will come first? Of course, this very site is your complete resource for all things stupid, so we will lean toward Peak Stupidity, to align with our business model.

However, just staying on the internet and reading the daily stupidity here in America makes me think that the lunacy may indeed be peaking along with it. The root "lune" is from Latin, meaning something to do with that moon up there, which is known to bring out the crazies when full. I always liked the scenes in Cher's/Nicholas Cage's 1987 movie Moonstruck with the talk about the full moon. (Yeah, it's a chick-flick, but a favorite nonetheless, even with the lunatic Cher in it.)


Perhaps the most famous music album cover of all time: 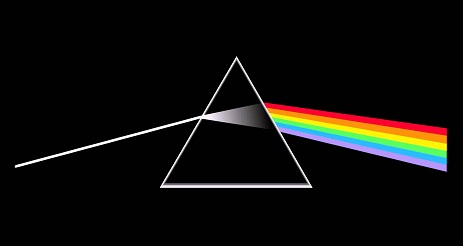 Pink Floyd is not really in with the style of Peak Stupidity's normal music, but Brain Damage/Eclipse, which I always thought was called Dark Side of the Moon (till just now!), written way back in 1973, fits these current times pretty well. What with the outsourcing of the funny farms, this stuff hits even closer to home.

Dark Side of the Moon was one of those "concept albums", as most by this unusual rock band were. Back when there was this thing called "the charts", this album remained in the top 100 of the rock album charts for something like half a decade(?)!

The lunatic is in the hall.
The lunatics are in my hall.
The paper holds their folded faces to the floor,
and every day the paper boy brings more

And if the dam breaks open many years too soon,
and if there is no room upon the hill.
And if your head explodes with dark forebodings too,
I'll see you on the dark side of the moon.

And if the cloud bursts thunder in your ear,
you shout and no one seems to hear.
And if the band you're in starts playing different tunes,
I'll see you on the dark side of the moon.

Pretty much, that's present-day America, minus the paper boy. Posting will have to be fairly light again through the weekend.


PS: There is no dark side of the moon, as this body rotates at the same rate as its revolution around the Earth, ~ 28 days. There is a Far Side though, 90% of which could never be seen by man, until American and Russian space probes photographed it in the mid-1960's.

Moderator
PS: OK, thanks Dtbb.
Dtbb
PS:OK, just looked up wiki's definition of chart. Top 200 selling albums that week.
Dtbb
PS:I had a bit of a brain fart regarding the moon's rotation. After I hit submit I knew my thinking was off. I grabbed a couple golf balls and got it straight in my head. The moon has to rotate on its axis as it orbits earth keeping the same face towards earth. Not sure what is meant by charting to Wikipedia.
Moderator
PS: Ganderson, I could think of a couple of hundred bands from the rock era I'd put ahead of them, but they did know how to make one of those concept albums. "The Wall" was probably the most famous example. I don't compare the music to that of The Dead, The Eagles, or Steely Dan, but, man, that is one way to sell a whole double-record set! It's hard to make singles out of some of the songs mixed with noises. "Collect call from Mr. Floyd for Mrs. Floyd ... are we reaching?...."
Moderator
PS: Dtbb, yes, the moon will get around the sun in a year just like we do, but it's revolutions around the Earth monthly (a lunar month, of course) give it one sunrise and one sunset per month.

As far as "Dark Side of the Moon", I was thinking of the top 100 chart, which, if I recall correctly, was the big-one, as far as albums went. It may have been a whole decade there. 900 weeks is > 17 years. Was it there for that long, or did they mean top 500 or some other number, by "charted".

Ganderson
PS Never much cared much for Floyd- they seemed to take themselves too seriously.
Dtbb
PS:Well the moon rotates in relation to the sun. According to Wikipedia the album charted for 900 weeks.