No Country for White People? 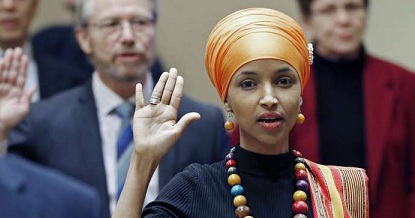 Alright! Some things that I read make me so pissed off that I'm even more thankful that I don't have the TV in use with anything but the DVD player (been quite a number of years, too). It's not just that I'm not giving the Lyin' Press the money and attention they crave. It's also that I can vent via a comment on a Steve Sailer post, get the gist of what's going on, and not have my blood pressure go up like it would if I had even a truthful (ha!) infotainment "journalist" tell me some of the stuff I just read. Keep in mind that these flat LCD screens are just not made like the old CRTs - they can easily be made unusable from just the throwing of shoes and/or dinnerware (still, don't throw out that Best Buy receipt - you can fool some of the Geek Squad some of the time ...)

Steve Sailer wrote this afternoon on the latest from the famed Somalian Congresscreature, Miss Omar, out of the great white north side of Minneapolis, Minnesosta, land of the Snowflakes. In Rep. Omar: "This Is Not Going to be the Country of White People", Mr. Sailer comments on some ingratitude of this fucking Moslem Somali refugee that deigns to determine the future of this country. (The frequent reader may see some visual indicators of high blood pressure right here and now!) It's a short post, and I hope the author doesn't mind that I excerpted pretty much the whole thing. Here's Mr. Sailer's as-usual-interesting take:

The Somalis are a pretty interesting group because unlike the Mexicans, who tend to act like, deep down, they know that the Anglos are better at governing than they are, and the Chinese, who tend to act like they’re willing to let the whites run the country awhile longer while they make money, the Somalis apparently love politics, or at least the glorify your ancestors and spit on your enemies part that has done so much for Somalia.

Heh! Also, note that some of us don't mind stereotyping people when we notice things, something all of us should emulate.

If you go back only a month or two, many on the alt-right or just conservatives in general were pretty hip to this lady's attack on the US Gov't (Trump especially included) and its policy of treating Israel not only as if it were a US State, but as if it had representation larger than California's. I suppose it does. "Yea! for Congresscreature Omar for calling this out. There's some courage!" Actually, though it would take some courage for anyone else to do this, as "you'll never work in dis (politics) bidness again", and politicians have the least amount of courage next to journalists, it doesn't take courage on this Omar's part. She has her Moslem credentials to shield off criticism in a way that Starfleet Chief Engineer Scotty could only dream of. Either way, "Yea for her. You go, Burkha-grrlll!"

Yeah, how long does that stuff last? Here she comes back as the most ungrateful immigrant the US may have ever had, as of yet, and we've sure seen some ungratefulness. It was in my lifetime when you still would hear "My ancestors came on the Mayflower, and the men fought in wars from the Revolution through Vietnam. In the meantime, your parents came over on a freakin' boat, so STFU about everything!" Now, we've got a refugee who's only here because, per Steve Sailer,:

the genocidal regime in which her whole family was employed (her grandfather at a high level) had made itself so hated by other Somalis that once the dictator fell, it was likely that the public would try to take vengeance upon the Omar family.

It doesn't take regular gall for Omar to tell Americans what they should expect in their future here. It takes some special kind of gall, from the gallbladder of a menstruating Grizzly, to enable this stupidity here.

Do we want to take in more of this type of person? Is Steve Sailer's description of the pernicious persecution of her kind reason enough to possibly make for a new "Omar's Law" added to the immigration law? They say head cases make bad law, or something like that, but I think the out-of-control American Feral Gov't would go for making importation of more Omars new policy. Come on, Minnesota Lutheran Ladies, here's another niche market for you. Can you say, "Cha-Ching"?!

Moderator
PS: Yes, it's really not an issue that I thought much about in the past, though I did always wonder "why do you people give a crap what goes on in the Middle East?" As usual, it's about money (huge donations) for political support.

Enough is enough, especially when your country is beyond broke! (What's it now $23 Trillion in the hole, or still only rounded to $22 Trillion.
Dtbb
PS: Speaking of Israel as a state. My governor, along with his cabinet, are going to have an official meeting held in Israel. He is probably going to use the occasion to sign into law an as yet unpassed, but surely to pass, anti semitic hate crime law. I am fairly neutral about Israel, but come on. Enough is enougj