Instant Karma at the Intersection 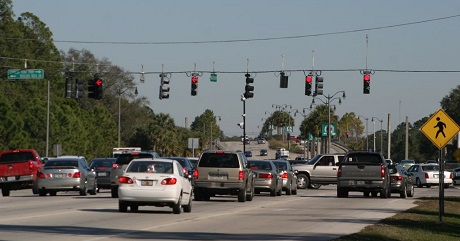 Here's another post for Peak Stupidity's as-of-yet little-used topic key Traffic Stupidity. I'd guess any reader and/or curmudeon worth his salt could come up with some great posts involving stupidity on the road. I imagine there are whole blogs about it, as traffic stupidity is possibly the form we experience the most in life - I could see a thousand-comments-long thread with some very reasonable words about "the next thing this asshole did" and "I hate when these jerk-offs to ..." etc. Rather than induce road rage, a site like that could probably be very cathartic its readers. It's just not who we are, here, though, and there are other flavors of stupidity much more dangerous than simple blocking the passing lane at 75 mph, LIKE A COMPLETE IDIOT!

This is about the lack of courteousy regarding turn signals. I don't always use the signal, if there's no one to signal to. It IS, however, a communication device, and it's kind of helpful if other drivers know your plan. This quick deal I was involved with at an intersection was somewhat different from most discourteous acts on the road. There may very well be a 7-syllable German word for how it panned out, but I'll call it some instant karma.

If you can't visualize well, you may want to skip this post, as I just didn't want to put the effort into a diagram. I'll try to explain it well: There's a busy 4-lane road nearby that has a stoplight where one can cross on the less-busy two-lane road. The light stays green for the big road until a vehicle runs over the eddy-current embeded sensor loop in the road (either side of the intersection). The light may still stay green for the big road as much as 2-3 minutes by my estimate, even after the sensor is triggered. It will only stay green for the small road 20-25 seconds, and this is integral to this small unimportant story.

On one side of the big road, the single lane of the small road widens to 2 lanes, one for right turns and one for straight or left. In the other direction this two-lane road widens to 3 lanes, also just for 100 ft or so before the intersection, to allow one lane for right, one for straight, and one for left. I was in the straight-ahead lane on the 3-lane side next to a big SUV that I couldn't see past wanting to turn left in that left lane. On the other side there was a guy in the left/straight lane with no signal on.

Well, I couldn't just start driving straight through, as I didn't have any view over the SUV - people run this light at 45 mph. I needed to wait a bit for him to move somewhat to block the cars, or at least until no one would be running the light anymore. The problem is, that the guy across had no signal on. If he was going straight (not requiring a signal, of course), then the guy next to me would need to wait, to yield the right-of-way to him. He wasn't moving much, probably wanting to turn left, but, you know, we didn't know. It was a stand-off, as this no-signal a-hole had to wait for me to cross if he were to make his left turn. It was kind of like rock/paper/scissors. Did I mention that if the light turns red, you may have to wait up to 3 minutes?

This guy trying to turn left with no signal was just screwing himself, and that was the excellent instant karma here. If he'd have signaled for a left, then the SUV could have taken his left turn, then I'd have started moving quickly straight ahead simultaneously, and then Mr. no-signal could subsequently make his left turn. The stand-off lasted until the light was yellow, the SUV said "fuck it", made his left turn, and then I went through. Then Mr. no-signal made his left turn, probably through a red light. His being pulled over for running it would have been some turbocharged instant karma!

Moderator
PS: Rats. I couldn't find it at the library, BC; it sounds like a great book, and Professor Dutton sounds like an honest truth-seeker. It's especially honest of him to point out that the social "scientists" aren't the brightest.

I'll have to go to youtube and check it out. Thanks for the info.
BernCar
PS: Dutton, an Englishman, teaches at Oulu University in Finland, and has a PhD in Religious Studies from Aberdeen University. He has recently co-authored a book called "At Our Wits' End: Why We're Becoming Less Intelligent and What it Means for the Future." I see he has been interviewed on Red Ice TV, and his co-author Michael Woodley has been on Stefan Molyneux' channel. The Z-Man mentioned him in a positive light today.

Dutton and Woodley start their book talking about the Concorde and the moon landing and theorize that such accomplishments are getting out of our reach because society is getting dumber by the day. Dutton says that physical scientists are smarter than social scientists, so he's got that much right. Dutton has ventured into evolutionary psychology and human biodiversity, which bespeaks a devil-may-care attitude toward his career in academia.
Moderator
PS: The cell phones are a big factor, IMO, mostly for the distraction aspect, but also it's that I think even the young people can't see well enough to focus on distance and speed (in the distance) due to their long-term focus on one-foot-away little screens.

Yeah, the women seem more oblivious. Haha, stupidity IS a growth industry. Tell me who this Edward Dutton is, BC.
BernCar
PS: Stuff like that happens to me all the time and it seems to be getting worse. Maybe I'm just getting older/grumpier, or it's the cell phones, or, as I really suspect, all these other people are getting stupider. The person in your scenario had to actually think through a three-body problem at the intersection, so naturally her system was overtaxed and she sat there like an idiot. I assume it was a she, because that's a 90 percent safe assumption.

Smart move, blogging on stupidity. It's a growth industry. Seriously, this Edward Dutton guy is getting a little airtime on our side--his thesis is that society is getting dumber as a whole.