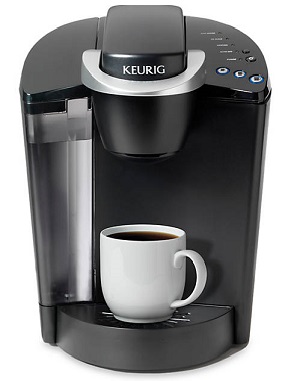 Here's a little bit of my experiences as of late with high-tech coffee making, via the fancy-assed Keurig machines, often at hotels nowadays. Though the Curmudgeonry Topic Key is attached here, this is not really an anti-Keurig post, per se. (Besides our reports of our annoyances with the Cheap China-Made Crap, Peak Stupidity has had only one consumer reports type disparaging post. That was about the "Lifeline Screening" mobile blood-work lab outfit that is truly a big scam!). Nope, I just have a problem dealing with machines that seem to want to run things.

These coffee makers are made for convenience in 2 aspects. The first is that the coffee pouch is self-contained in a nice clean sealed container (in the same way as some of the fake/real creamer is but larger) that gets punched by the machine after it's been inserted. The 2nd is that this machine steps the user through the process, in an "idiot proof" manner. It will not let you do things out of order or forget anything, which can become the problem. After the user pushes a button to open a cover for of insertion the coffee-ground element, inserts it and closes the cover, then the water reservoir cover opens next in sequence. You must close that cover to get the brew button lit up, meaning ready to start heating the water. Oh, if the cup isn't in place, or is moved out, the brewing stops, because this thing has it ALL under control. You are a human and are error prone. It is a machine guided by logic on a chip and never, never screws up.

Well, how 'bout I just want to heat up water for my oatmeal? What you have to do then is to act like you're making coffee and hit/move things in the appropriate order. I already feel like an imbecile following a machine in doing this, but it works. However, I often do not want the caffeine, but do like a cup made with the decaf element. I like the coffee taste, but don't want the caffeine (Peak Stupidity's take on caffeine as one of the 4 basic food groups is here.) It's really a matter of feeling better getting a sugar fix this way then by just downing 2 or 3 sugar packets - that just doesn't have the healthful look to it.*

In this case, it gets tough. I want the condiments in the cup beforehand so the hot coffee can pour on it, mixing it better, or that's my theory. OK, push the big button, insert the coffee element, close that cover so the next cover opens to pour the water in, take the cup to pour in 2 (OK, 3) sugar packs, the 2 creamer packs, but, wait, the machine is flashing, meaning "hey, put the cup in, dumb human!" "Yeah, but, you could start heating up water ahead of time, as it takes a while before anything will pour out." "I am Keurig. I will run this process. What you are doing is highly irregular. Put the cup in!" I get all hurried ripping and pouring in those condiments ... rushing to not annoy the machine, before ... Oops, now, it's too late! "I'm powering off, as you obviously are not ready to make coffee, with no cup in place."

Damn, then I need to fake like I'm starting over ... push the button, the coffee ground element is already there so I close the cover. Now, the water reservoir cover is open, but there's already water there, so close that up, and mash BREW again! Do you see the problem here, people? The machine is running my life. I have to make an effort to fool it, or probably more accurately, PLACATE the machine. "Alright, I've done what you want. Can you start heating the water and finish up, bitch?!"

This is just one of many machines that have recently been doing this to us. Cars are of course, another, more ubiquitous example, and a subject for many other posts. Those of us cursed with the biggest examples of Artificial Stupidity, our "smart phones", (possibly) unconsciously** deal with this every single day. We go flipping around menus, taking 5 steps always thinking "what does it need me to do now?" It's not quite the same deal as requiring work-arounds, but it's still more effort than that required with that old brick phone which was really made to do one thing - dial the damn number!. That's all I want right most of the time. 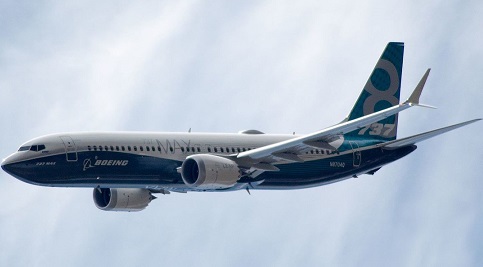 I will not get into details that have been all over the news lately on this. I will say, from talking directly to American pilots that have flown this specific variant of the best-selling Boeing 737, that a couple of switches made to cut-off electric stabilizer trim right away would have saved the day. However, this is not to excuse Boeing for trying to patch poor very-high angle-of-attack flying qualities of this plane (due to change in engine placement) with a piece of software that was not made well known to the airlines and pilots.

My point here, though, is to say that Boeing made an Airbus move in this fiasco. Airbuses have always been known to be designed to let the flight control computers have the last word above the actions of the flight crew. There have been a number of crashes due to this design philosophy. Boeing Aircraft's engineers have, in the past at least, understood that there is a time when things go wrong enough that the pilots will need to cut off all automation, take the plane, and JUST FLY. One should not have to think of ways to PLACATE the airplane to make it do what one wants, to keep airborne at a good flying speed and in the right vertical direction..

Yes, that is a life-and-death example of machines made to control people rather than to be controlled by people. It's been a much bigger deal than my sugar-laden de-caf coffee. Let's keep a watch on these machines, people!

* OMG, and we completely missed a post in celebration of National Frozen Food Month. Usa Culpa.

** I just realized I've had to do this PLACATING of machines thing right here upon writing this post. With this device, a I write, auto-Capitalization/punctuation starts happening, and I have to keep going back-and-forth on the text (usually the 3rd time tells it to ignore) or do work-arounds to get the writing down. Damn, I wish this were 1992 word-perfect!

Dtbb
PS: By phone. Thanks.
Moderator
PS: Right, Dtbb, I figured that. I just have come across the situation in which I guess it's not the scanning but the credit/debit look-up which is messed up (haha, I wonder if anyone has those old hand slide/imprint things left, along with a big-ass book of bad CC numbers too! That'd be a blast to see - especially the look on that young guy with the man-bun when the old cashier does it that way.

Hey, I've got to figure more about the bug you ran into. It should not be a limit on character count doing this. Was this on a phone or tablet? They do weird things. I'm sorry for the problem. This software needs work, as I wrote in that 1000th post.
Dtbb
PS:I had cash but still couldn't buy anything because it had to be scanned. I tried including that in the original comment but after a certain length the submit tab disappeared.
Moderator
PS: Haha, I'm sure you didn't mean it any certain way, but that's the way they take it anyway.

As far as all the computers at the store, I do like it, though, when nothing is working but cash. Up to the front of the line I go, Ka-Ching! (or is it spelled Cha-Ching, I dunno?)

Thanks for writing in, Dtbb.
Dtbb
PS
I hear ya. A while back I went to the grocery store to pick up a few items. Got to the checkout and the girl informed me no dice; the computers were down. I was a little piqued and called her a slave to her computer. It didn't help that she was black.